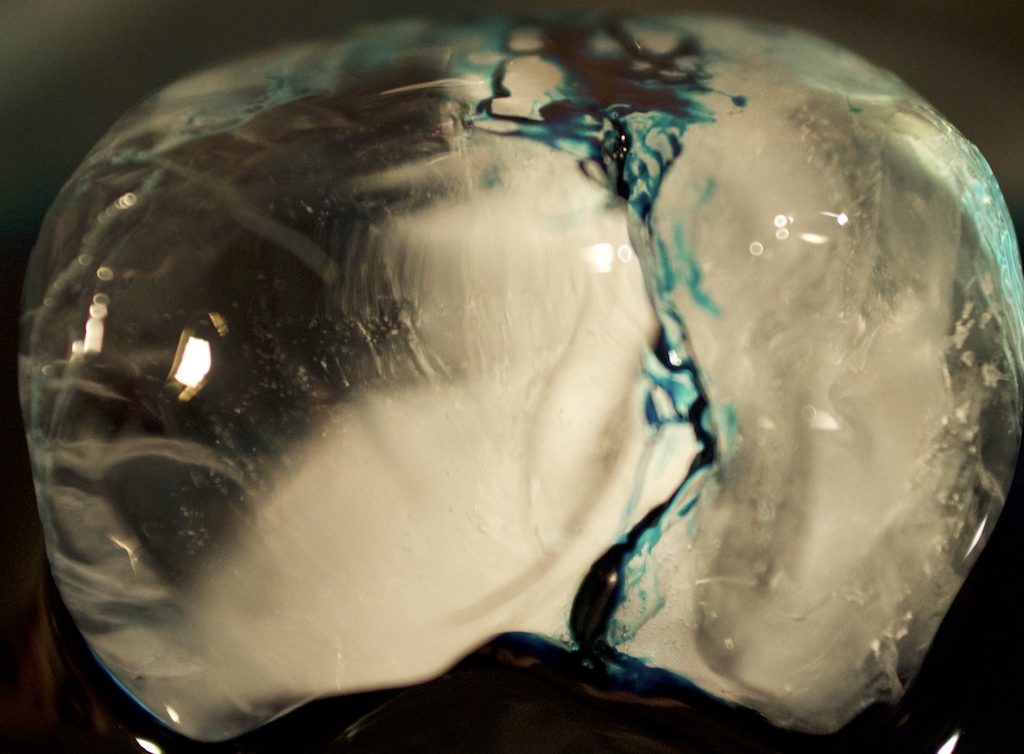 As the first project, Get Wet is intended to help us become familiar with the details necessary to take a good photo of flow occurring. From idea stage to execution, it is all on one person to choose a topic, and create a beautiful, scientific image. I think that many of us underestimate the details necessary for a good photo. One thing wrong and the entire shoot can be nearly worthless. For my image, I wanted to show off the details that can be trapped in ice and the flow that occurs on the outside. I enjoy the beauty of ice balls and thought they could make for a great photo. If food coloring could get in the cracks and show off the inside of the ice ball, it could result in a beautiful image. In order to do this, I was able to get my friend Ellie to help me hold the ice ball in place and drop food coloring, while I took photos.

Once ice has been taken out of the fridge, it begins to form a layer of water on the outside, as the outside is the warmest and will melt first. As I describe later, I ran the ice ball under cold water to accentuate the cracks and make it appear more clear, this also added a layer of water on the outside. For example, years ago I learned that the reason ice skates work so well is that the force, friction and movement of the skate creates a small layer of water between the skate and the ice, acting like a ball bearing. The ice itself is not innately slippery, in fact, you may have noticed that when it is extremely cold and dry, ice and snow feel more grabby and chalky. However, when there is a layer of water on the ice, this makes it quite slippery. When the food coloring is dropped on the ice, it flows downwards with gravity and moves towards the deep gully in the photo and to the lowest points. The flow of the dye seems to be wiggly, almost looking like a river. It does not evenly distribute, but stays in narrow and clumpy bands. This is characteristic of the rayleigh taylor instability, where two liquid interfaces meet. Just as this can be described with food dye in a glass of water, we are likely seeing the same thing, just with a much smaller layer of water and with gravity flow and shear force on a surface also playing a role.

For creating the visualization of the flow in my image, I was using a 3in diameter ice ball. This ice ball was then run under cold tap water for 10 seconds to create cracks and make it appear more clear. Then, it was set on a clear glass pan cover. This was placed in front of a black laundry basket that created the dark background. These items were all on a dining room table, and the table was used to lay the camera on and get a stable image, as I did not have a tripod at the time of shooting. A 100w uncovered lamp was placed on the table, two feet to the left of the camera and ice ball setup. Additionally, there was a ceiling fan with 3 light bulbs nearly directly above. For the actual flow, Blue “McCormick Assorted food colors & egg dye” was used. Ellie would apply two drops of food coloring from one inch above the ball, in order for it to drop on the ball and flow down. I would then take photos and we would repeat this every minute. After a minute had passed since the original drops, we would drop two more, as the previous drops had time to settle into the cracks and the new drops could highlight the immediate flow. The photo I chose was taken after the fourth round and after a total of eight drops.

For this photo, I was using a Nikon D3200. It was in manual focus mode, with the iso at 2800 and the shutter speed at 1/60th of a second. The lens was at 28mm and f/3.5 aperture. The full raw image is a RAW format of 6016×4000 pixels and my final image was cropped to 3632×2676 pixels. In my final image, the ice ball is nearly edge to edge in the cropped frame and the diameter of the newly opened ice ball is exactly 3in. As some had melted away, I found that the ice ball at this point was about 2.8 in across. I took the photo from about 6in away and manually adjusted the focus for various pictures. I did not have access to a tripod and took photos from many distances, angles and focuses to try to get one I liked. I chose this one due to the balance of focus, lighting and flow structure.

I chose to take a photo of an ice ball because I had been quite interested in them after I received the molds as a gift. The crack patterns and clarity in the ice can be quite interesting. You can see where the water froze perfectly and where the dissolved air in the water was pushed up and trapped within the ice as it froze, this is what gives it the white color and allows for imperfections and gaps for the cracks to form. I thought it would be cool to add food coloring to leak into the cracks. However, it turned out that the dye did more flowing over the surface, than actually moving down into the cracks, although I really liked the resulting phenomenon. I am still wondering exactly what I am seeing, as one could argue that the dye just shows how normal water would flow on the ice, and the only difference is that we can actually see it. The other option is how I have explained that it is a different fluid interacting with the water and results in a unique pattern. I was a bit surprised with how the photo actually turned out, but I really enjoy the end result. I would really like to take another photo of a perfectly clear ice ball that was made with directional cooling, but that will take some work.