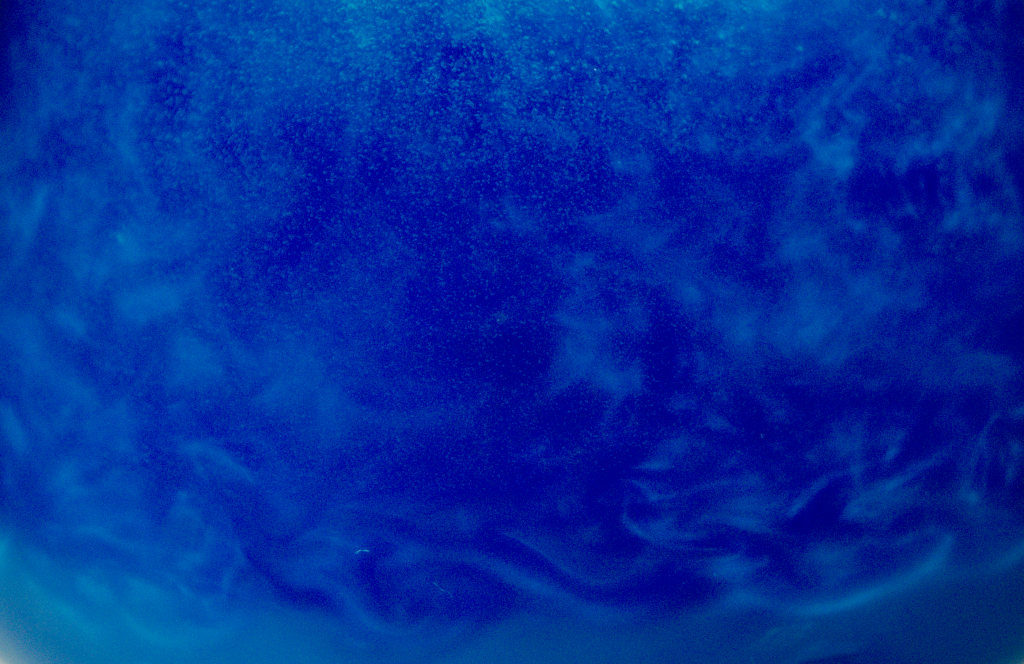 Initially I wanted to take a photo of a Nicola Tesla one-way valve, particularly the turbulence of the backward directed flow where there would be the greatest impedance to the flow. To see the turbulence, I made rheoscopic fluid following the directions from the paper “Rheoscopic Fluids in a Post-Kalliroscope World”.  I hoped that the rheoscopic fluid, which is good at refracting light in turbulent flow, would show a nice pearlescent knot at the juncture.  However this did not work out, and I was unable to see the effects of the rheoscopic fluid through the valve.  This failure might have been due to how thin the rheoscopic fluid was inside the valve, or perhaps the lighting was not right for the set up I had.  I did find when playing with the fluid in a clear vessel beautiful swirl patterns were forming. I decided to use this phenomenon for my photo as it clearly showed the effects of no slip conditions on a surface. With the help of Duncan Lowery, Brent Eckles and Bradley Busek I was a able to get a good photo from our experiment.

I made the rheoscopic fluid, following the directions of “Rheoscopic Fluids in a Post-Kalliroscope World”. I used Barbasol shaving cream like suggested.  I filled a milk jug with the shaving cream, then filled the jug with ¾ water. I capped the jug and shook it.  Next I allowed it to settle for about 20 minutes.  After it had settled I siphoned off the fluid in the bottom while taking care not to get any of the sediment on the bottom or the foam on top. Finally, I poured the liquid incrementally through paper coffee filters to help with the cloudiness. (Borrero-Echeverry)

The experiment consisted of a beaker filled with the rheoscopic fluid mixed with 6 drops of blue dye. The beaker then was placed on a diffuse white table while Bradley Busek, Brent Eckles, and I held the two LED lights about 120 degrees off the angle of the camera. Duncan Lowery operated the camera and took photos and videos. To agitate the fluid, we gave a quick twist to the beaker, which caused the wave pattern seen in the photo.

The wave pattern shows the no slip condition near a boundary of a surface.  The no slip condition is when the fluid velocity is the same as the boundary velocity. The condition is generally applied to most viscous systems but there may be conditions and fluid where this does not apply. The other phenomenon seen is shearing. Shearing in fluid is most commonly seen as a shear stress. .  Where  is the dynamic viscosity, u is the flow velocity and y is the boundary layer. What this means for the for the experiment is when the beaker twists it is moving parallel to the fluid at some velocity u, and because of the no-slip boundary condition the fluid immediately around the surface of the beaker moves with the same velocity as the beaker. Now that a small amount fluid is moving at the same speed as the beaker, the fluid will impart a shear on the neighboring layer above it.  This new layer will not be going as fast because it will shear, or in other words, slip. This will continue layer by layer until there is no significant velocity to impart. For this photo the beaker was twisted rapidly 180 degrees forward and back then stopped. This motion causes the fluid to flow in one direction.  Then when the beaker went the other direction the no slip condition forced the fluid next to the walls to go the other direction, causing the fluid to shear across its self.  This made the eddy waves seen in the photo. (No-Slip Condition) (Shear Stress)

To see this fluid phenomenon I used rheoscopic fluid. “Rheoscopic fluids are a common technique for visualizing spatially extended flow structures. In rheoscopic flow visualization, the working fluid is seeded with small, anisotropic, reflective particles. Due to their anisotropy, the particles become preferentially aligned in the flow. Therefore, when they scatter light, they highlight qualitatively different regions of the flow.” (Borrero-Echeverry) In this case stearic acid crystals are what is used to be the anisotropic, reflective particles.

The photo was taken with a mirrorless Panasonic G85 at 16MP, with a F stop of F/5.6, a shutter speed of 1/800 s and an ISO of 640. The photo was taken with a Telephoto lens with a focal length of 150mm. I used a telephoto lens because it was easier to be farther away and to be able to move around the table the experiment was set up on. It also helped avoid accidents with water and the camera. The raw photo is 4816 x 3465 pixels. I used Gimp and Darktable to edit the photo.

In the editing process I lightly adjusted the curve. This helped to darken the blues to make it a deeper blue and it also help make the crystals in the rheoscopic fluid pop.

I think this photo clearly demonstrates the effects of no slip conditions. It would have been a better picture if the rheoscopic fluid was more reflective with a stronger contrast of dark to light. The image would also be clearer if there weren’t any bubbles, and might have been improved with better lighting. It would have been an easier image to take if I had a light diffuser and brighter sources of light. If I did this experiment again I would attempt to filter the Rheoscopic fluid a few times to see if some of the cloudiness could be mitigated or attempt to concentrate the crystals through as evaporation.