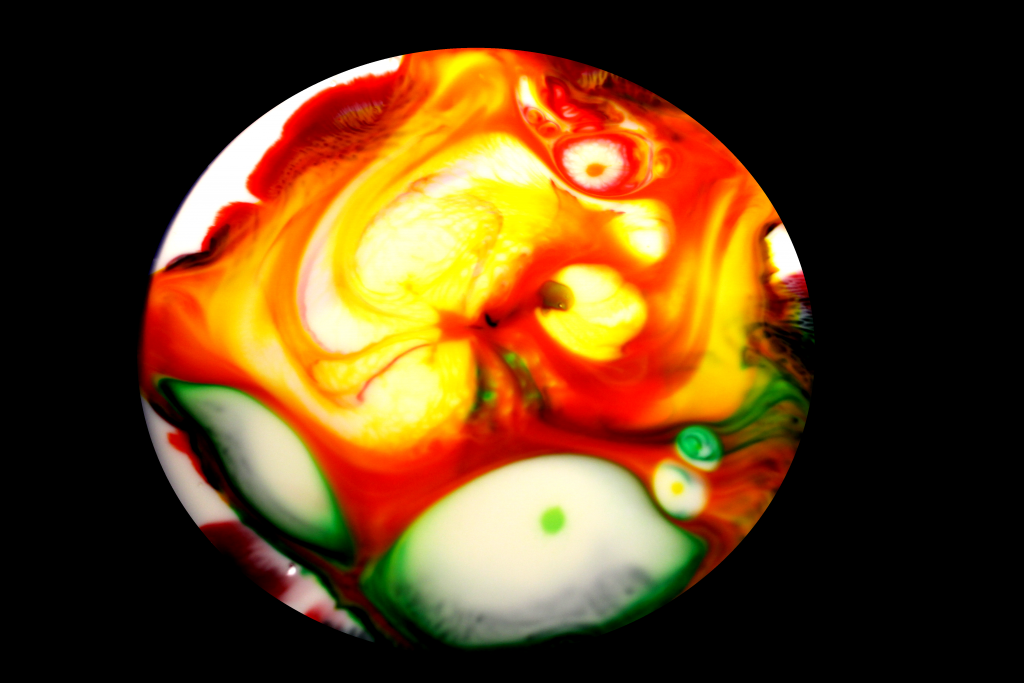 The purpose if this image was to capture an image of the classic experiment of putting food die, dish soap, and milk together.  We wanted to be able to capture multiple images as the liquid was moving.  The first few times we added to much milk or to little food die are were not pleased with the physics and images that were being produced, but after a few test runs we were able to nail down the correct portions and produce images that we all liked.  Thanks to the help from my teammates, Will, Steven and Chris we were able to produce multiple images that we liked.

In order to capture this image, we used a paper bowl, milk, 3 colors of food die and dish soap.  First, we added milk to a blue line in the bowl that we were using to keep the amount constant throughout trails, then we added 3-4 drops of each food color around the outside of the bowl and to start the flow a drop of dish soap was added to the middle of the bowl.

The visualization technique used was one of which food die was need.  In order to see the effect of the dish soap dropping the surface tension and forcing the milk to move was only visible when food die was added.  The lighting used to capture this image was that of the room we were in and a phone flash light, with this lighting we were able to reduce glare and focus on the movement more.

In order to capture this image, I used my roommates Cannon SL1.  I had the F-stop set to f/5, exposure time at 1/60 sec, ISO at 400 and a focal length of 41 mm.  I choose all these setting because after playing with the camera for a little I found that these setting helped me produce the best image possible.  In post processing I turned the blacks darker are whites brighter as well as cropping it in a circle.

I feel like this image reveal a lot.  It helps show what can happen when different fluids mix and how they interact.  I like the final image that I was able to produce, I feel like in the end the image looks good and shows the flow well.  If I were to redo I would use a Q-Tip to add in the dish soap, that way we are able to better control it.