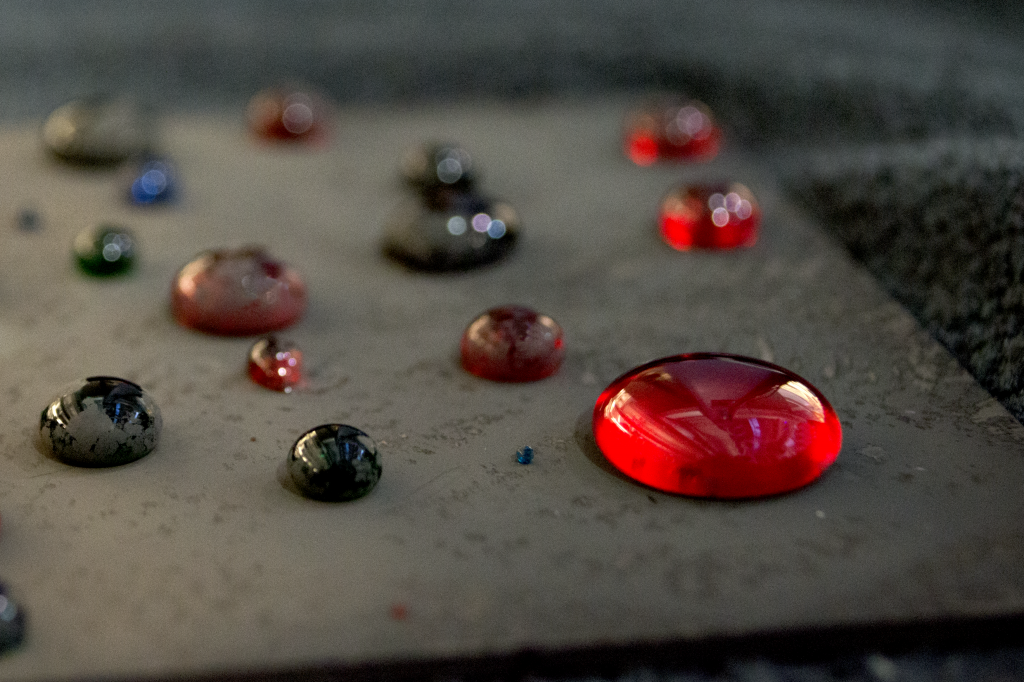 We created a “superhydrophobic” surface on which we placed several colorful droplets of water.

Flow visualization give insight to how flow phenomena operates in our surroundings. For this assignment, teams were tasked with photographing these phenomena. Team 2 worked with superhydrophobic surfaces. These surfaces allow water droplets to have high contact angles, resulting in spherical or semi-spherical droplets. Using a homemade surface, the team dropped several dyed water droplets on the surface and photographed the results.

In order to create a superhydrophobic surface, few items are needed. The team used isopropyl alcohol (90%), a small dish (ceramic), a lighter, a piece of glass, and a ceramic plate (Figure 1). The process does involve a flame, so safety glasses are recommended. Fill the dish with a small amount of isopropyl alcohol and light this on fire. Holding the glass from the bottom, wave it over the flame to begin coating it in the soot from the flame. The glass used was fairly thin, so to avoid cracking it the team held the glass over the flame for 1 min and let it cool for 10 min. This cycle was repeated until the glass was black (about 4-5 min over the flame). During the cooling cycles, the glass was placed on the ceramic plate to avoid damaging the table the setup was resting on. Finally, the glass was cooled to room temperature (about 15 min). The coated glass is now a superhydrophobic surface. This process is a summary of a video found on YouTube made by Robin Deits [Ref 4].

For this particular experiment, the glass was a regular 8”x10” glass cover for a picture frame. The area coated in soot is roughly half of the area of the glass. The water droplets vary in size and were randomly distributed all along the glass. The water was mixed with various colors of food dye to produce the colorful array of droplets.

The following is taken directly from team member Katie Gresh’s paper explaining the physics of hydrophobic surfaces. Figures can be referenced in her paper. References in excerpt correspond to references at the end of the paper.

The contact angle (θ) on a rough surface is defined by Wenzel’s Equation where roughness is determined by the roughness factor and has a value greater than one [Ref 3]:

Arough    = Area of the rough surface

The contact angle (θ) on a rough surface is given by Wenzel’s Equation [Ref 4]:

The estimated contact angles for the chosen image vary from approximately 140 deg to 160 deg. Hydrophobic surfaces are characterized by the contact angle of the droplets. The high contact angles as seen in the images from our team occur when the surface is roughened on a nanoscale. The roughness acts as pillars that reduce the amount of solid that the water is in contact with and traps air between the “pillars” [Ref 5]. In this case, the ultrafine soot particles act as pillars for the water to rest on. Some of the droplets appear to be more spherical than others. This is likely due to the varying film of soot underneath the water. Some of the droplets bounced or rolled when they were placed on the glass and picked up some of the soot. This decreased the amount of soot beneath the droplets, resulting in lower contact angles.

The camera used in this experiment was a Nikon D3200 DSLR camera. The specifications of the images are shown below.

The lighting used was fluorescent lighting from the lab in which the experiment took place. For post processing, some light spots were edited out. Adjustments were made to the contrast, lighting, and exposure settings. All post processing was completed in Photoshop. The original and edited images are seen below in Figures 2 and 3, respectively.

Overall, I am happy with the outcome of the team’s experiment. Superhydrophobic surfaces are an area of research that would be interesting to explore. I wish we had played with different fluids on the surface. I also wish I had taken more photographs of uncolored water for a more natural looking image. Finally, I wish we had done the experiment in a place in which we could control the lighting. I like the FOV of the image I chose. I like that most of the droplets are softened and the largest is in focus. It is very interesting to me that contact angles can be estimated right off of the image. I would be interested in exploring this phenomenon further.