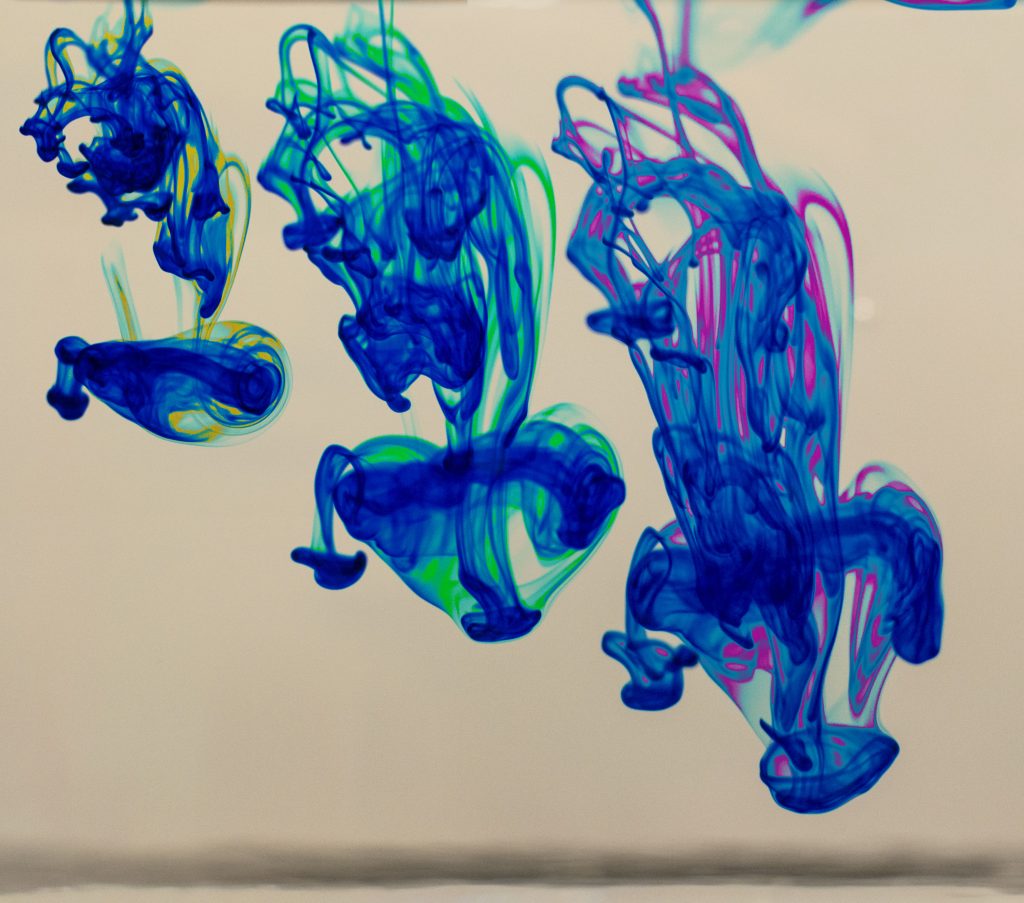 I took this image for the Team 2nd assignment in the Flow Visualization class at CU Boulder. The goal for this assignment was to capture the behaviour of water soluble dye mixing into container of water. Thanks to the rest of Team 5 for their assistance and for providing the tank and dye.

For this assignment we introduced drops of food coloring dye to water in a transparent plastic fish tank. The dye container allowed us to control the number of dye drops added to the water. Food coloring dyes are derived from petroleum. The molecules that make up the dye are designed to be water soluble so that even mixing occurs; the ionic bonds that keep them together are undone and the ions associate with polar water molecules (Rohrig). The Reynolds number for the flow in this image can be approximated will the following equation.

The low reynolds number indicates the flow is laminar. Fick’s first law of diffusion describes the rate of diffusion of the dye in water, however, because we didn’t take any measurements during the shoot we can’t calculate anything.

We set up the fish tank in conference room number fifty one in the Idea Forge, also known as  “Area 51”. The lights in the room were bright enough that camera flash wasn’t needed. We placed the tank at the end of the conference table to use the wall as a white backdrop. The only issue with using the wall as a backdrop was that it showed up as an off-white in the images.

The camera I shot with was a Nikon D3100 mounted with a 35mm prime lens. The shutter speed was 1/200, aperture f3.5, ISO 800 and automatic white balance. The camera-subject distance was approximately one foot. When editing the team first images I learned how to crop, drag, and drop images onto one another. However I still had trouble making an adjustment that would equally affect the superimposed frames. Specifically, in my team second image I wanted to lighten the background color. After discussing the issue with other students, I learned that the best way to go about lightening the background color was using the color replace function at the top layer in the editing palette. I could select the off white tone of the background and shift it to bright white. To highlight the mixing happening at the plume boundary I used the color replace tool to change the shade of blue to yellow, green and pink.

By patching three images together my intent was to produce an interesting progression of images that gave the viewer a more dynamic sense of the phenomenon. During the shoot I did not record any measurements which would have allowed me to estimate quantitative values for the rate of diffusion of the dye; however, the image turned out to be aesthetically pleasing which was one of the team’s main goals.

Rohrig, B. Eating with your eyes: the chemistry of food colorings. (2015) Retrieved from https://www.acs.org/content/acs/en/education/resources/highschool/chemmatters/past-issues/2015-2016/october-2015/food-colorings.html