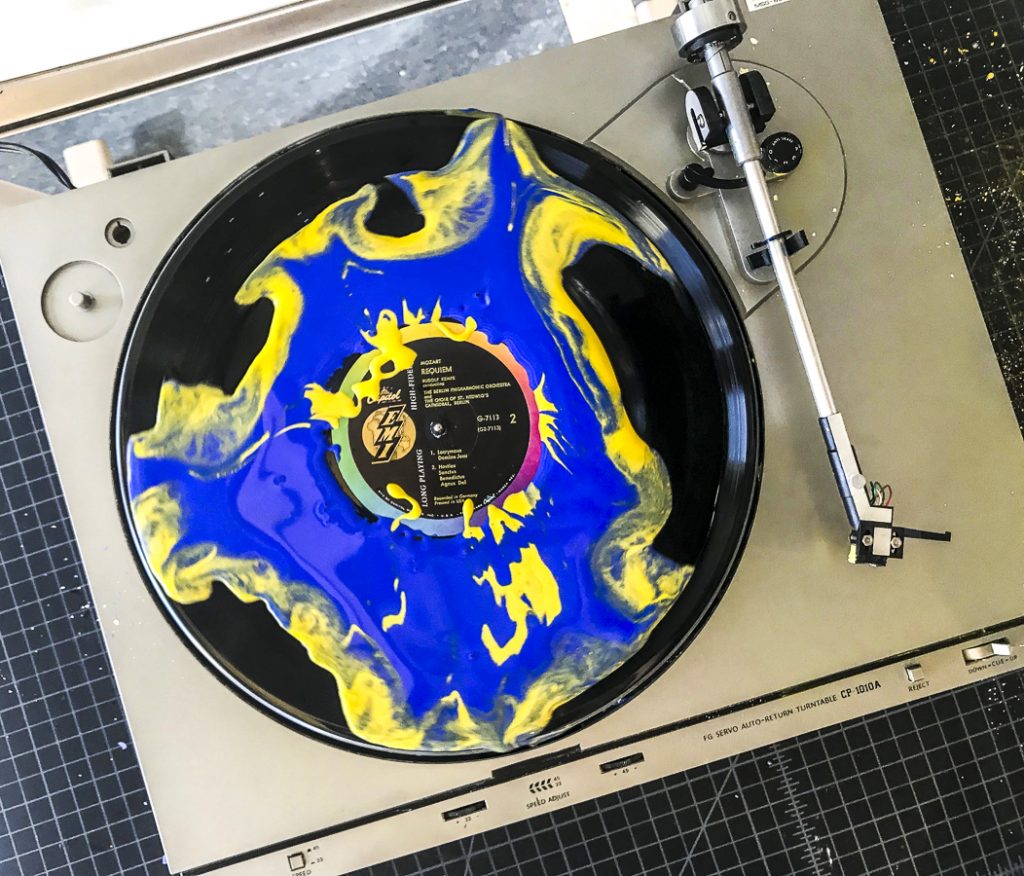 Oobleck on a turntable to showcase rotational flow.

For the first team assignment we were interested in looking at rotational flow, so we used a turntable to try and capture it. As with the Get Wet assignment, Summer and I were very interested in working with vibrant colors. We used oobleck made with two parts cornstarch and one part water died with painters pigment. I made this image with Zach Hinck, Summer Thompson, Brandon Toves, and Garrett Wolcott.

Oobleck is a non-newtonian shear thickening substance, meaning that it doesn’t follow Newton’s Law of Viscosity. There is no Rayleigh Instability in this batch of oobleck; we can tell because there’s not enough shear on the oobleck to make it break apart from itself. The oobleck is being acted upon slightly by centripetal force, although the turntable wasn’t spinning fast enough to greatly affect the flow of the oobleck, and slightly by Newton’s First Law of Motion, the Law of Inertia, although the Law of Inertia was only affecting the flow in the second or two after the turntable stopped spinning, again because there wasn’t much velocity in the flow. The most interesting parts of the flow happened after the turntable stopped spinning but the oobleck kept moving.

We made this image in the south lobby on the second floor of the ITLL in the engineering center, right next to some big windows, so there was a lot of natural light. There was a white board behind the turntable, which translates to the top of this image, for reflection.

This image was taken very off the cuff – my teammates were using our two other cameras and one was on a tripod taking video. I last minute snapped this picture on my phone, an iPhone 7, probably two feet above the turntable. The focal length of the lens was 3.99mm. The exposure specs were 25 ISO, aperture f/ 1.8, and 1/30second shutter speed. The aforementioned measurements were found in Adobe Lightroom. I cropped the image slightly in Lightroom, but the rotated angle of the image is original. I wish I could say that the rotation of the image is meant to comment on the type of flow we were working with, but the angle of the image happened organically.

I knew that, given my phone’s limited camera capability, I had few ways to pull this image off, so I really needed to lean on compositional success, which I was why I decided to employ a top-down vantage point. While compelling, this image isn’t really about flow. I think it needs to be more zoomed in on the flow to center focus there, but by doing that I lost the setting that the turntable provides. Additionally, in hindsight it seems an odd choice to use oobleck to look at rotational flow.