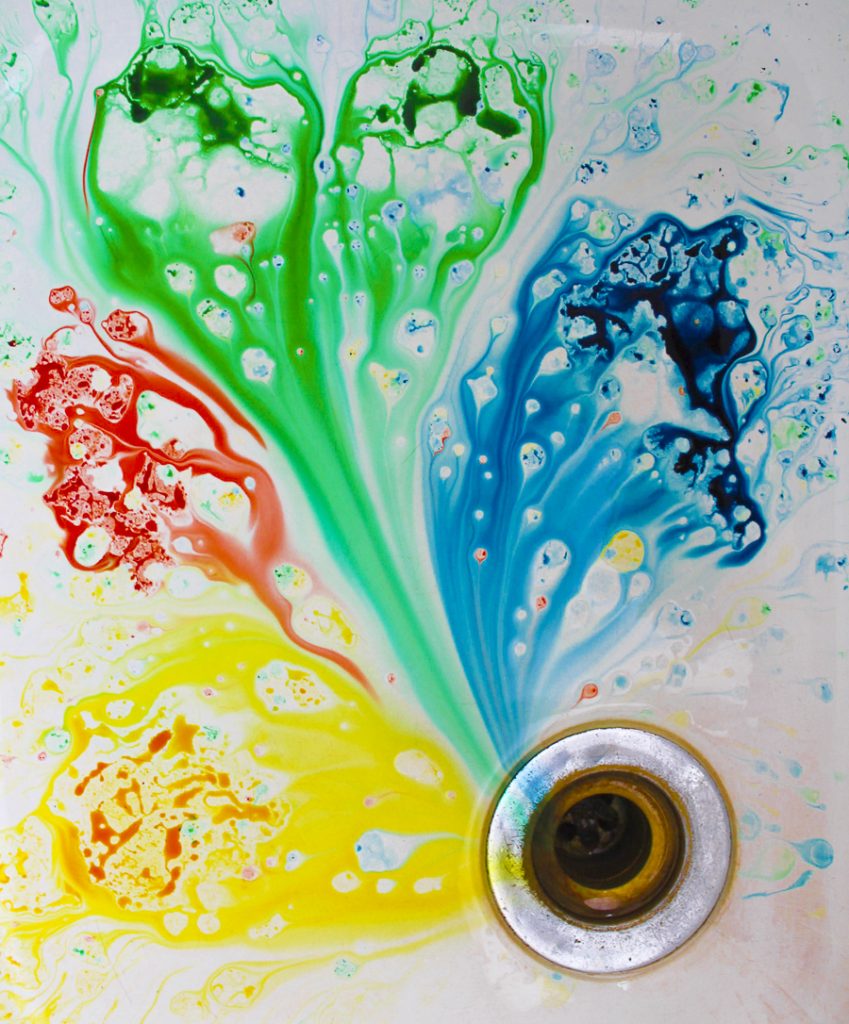 This image was created for our first Get Wet assignment. I was interested in making something colorful for this project, which is why I used food coloring. Initially, I was just dropping the food coloring into other kitchen-related liquids – water, milk, olive oil. I was successful in making some interesting images with that technique, but as I was cleaning up from that round of image making and pouring various dyed liquids down the sink, I was really intrigued by how the dye was flowing into the drain, so I decided to try capturing it. The resulting image showcases the Marangoni effect.

The Marangoni effect occurs on the interface between two liquids and is driven by a difference in surface tension between the two liquids. To make this image, I saturated the sink so that there was a thin layer of water for the dye to ‘catch on to’ and flow towards and eventually down the drain; the Marangoni effect occurred between a thin layer of water and the food coloring, the food coloring having higher surface tension than the water. There wasn’t much liquid involved in the flow, and the slope of the sink was slight – standard american sinks have a slope of ¼” per foot – so the flow was very slow moving, driven by gravity.

This image was not planned at all – as mentioned earlier, I was inspired to make this image by the cleanup of another round of image making. I made this image in my kitchen sink – 2ft long by 1.5ft wide by 1.5ft deep, made of porcelain. The sink was pretty dirty, so I scrubbed it clean with Comet Cleanser with Bleach. According to their website, Comet is mainly (60%+) calcium carbonate, a common cleaning agent. I then ran tap water to saturate the sink, and dropped the food coloring (Kroger brand food dye, from King Soopers) into the sink and watched and documented the flow. I assume the interesting texture that’s happening at the origins of the separate flows is an interaction between the food coloring and the Comet. Our sink sits directly underneath a big window, so the lighting in this image is just natural lighting, reflected and softened by the deep white walls of the sink. I took this image between 12:30pm and 1:00pm on a sunny day.

I took this image with my Canon Rebel T6. My lens was fully zoomed out, with a focal length of 18mm. Exposures specs in this image are 200 ISO, set by the camera, aperture f/ 3.5, and 1/30second shutter speed, both manually set by me. In post processing I cropped the image slightly, and turned up the saturation of the blues, yellows, oranges, greens, and reds in the image – I was motivated by color for this assignment. The original image showed the entire bottom of the sink, about 1.5ft by 2ft, and the image isn’t cropped much, so the field of view is slightly less than that. The camera was held approximately 2.5ft above the flow.

I’m really taken by the sense of place evoked by the sink drain in this image. I’m very pleased with how this image turned out – it’s got a lot of interesting textures and the colors are vibrant but not overpowering. Flow is apparent, and aesthetically pleasing as well.