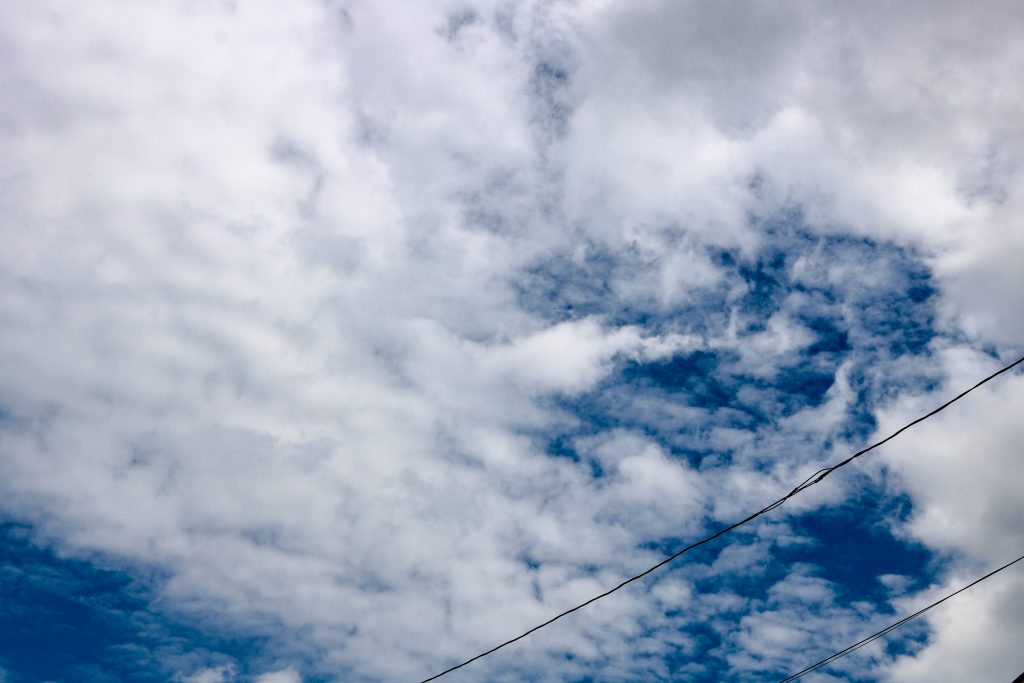 Cirrocumulus surrounded by larger, altocumulus clouds. Given the CAPE value of 0.00, the atmosphere appeared to be stable. Picture was taken on April 7th around 2pm. Skew-T of April 8th 00Z (~6pm April 7th).

For the second cloud assignment, I decided to photograph the “banal” or ordinary, since the last cloud image I took was heavily edited and processed. Admittedly, I took this image on a whim because it was the only time I had my professional-grade Canon camera with me and not just an iPhone 6s. The cirrocumulus clouds covered much of the sky that day, so I decided those were the clouds to capture!

I took this image on April 7th (2018) on a partially cloudy Saturday around 2:00 pm right off of Broadway Street in Boulder. I was facing the camera towards the south, which was where I believe a cold front was coming in that made it rain the very next week. The angle above the horizon was approximately 75º. The altitude of the clouds was roughly 30,000-40,000 feet from the ground. Overall, much of the sky was covered with bumpy, wispy high-altitude clouds, indicating the presence of a high pressure system in the area.

On April 7th, the atmosphere seemed to be stable given the CAPE value of 0.00. The winds were light and variable with an atmospheric temperature of 59ºF (high) and a low of 23ºF. A high pressure system dominated much of the area that weekend and beginning of the following week. The cold front that had passed through much of the state of Colorado was being replaced by a high pressure system, which resulted in high-altitude cloud cover and pleasant, warmer temperatures. The clouds captured in the image were chiefly cirrocumulus surrounded by a few larger altocumulus, especially nearing the end of the afternoon hours. Winds were around 10-15 mph with minimal upper-atmospheric turbulence and mixing. Orographic winds were absent throughout much of the day. The skew-T diagram shown is representative of April 7th at 6 pm because that was the one graph for DNR that was closest to the time of the picture. The two lines appear to be far apart in their vicinity to each other, which also indicates the presence of a high pressure system.

As an estimate, the rough size of the field of view was 0.5 miles across and 0.25 miles long. The distance from the object was about 30,000 feet, give or take. With the focal length at 33, the F number at 11, the dimensions at 6000 x 4000, and exposure time at 1/400, this image was quickly shot. The digital camera I used was a Canon EOS Rebel T6i with a 55mm lens. The final size of the image in megabytes was 5.2mb. Upon uploading the image, I made sure to do a bit of post-processing and editing in Creative Cloud’s Adobe Lightroom. I primarily tinkered with the contrast (decreased), whites and blacks (enhanced), and the clarity and dehaze functions. Otherwise, the tinting and saturation/color of the image were strictly entact and kept original.

With the powerlines in field of view and at the foreground of this image, I set out to capture an ordinary “suburbia” snapshot of clouds on a typically pleasant spring Saturday afternoon. Overall, I am somewhat pleased with how this image has turned out. I would have enjoyed to gather more images that day, however, my schedule did not allow for that unfortunately. In future cloud images, I believe I will plan to take more awe-inspiring shots with bright and colorful clouds and/or sunsets, which are most commonly seen at sunset or sunrise. I will also chose to include more interesting foreground objects.