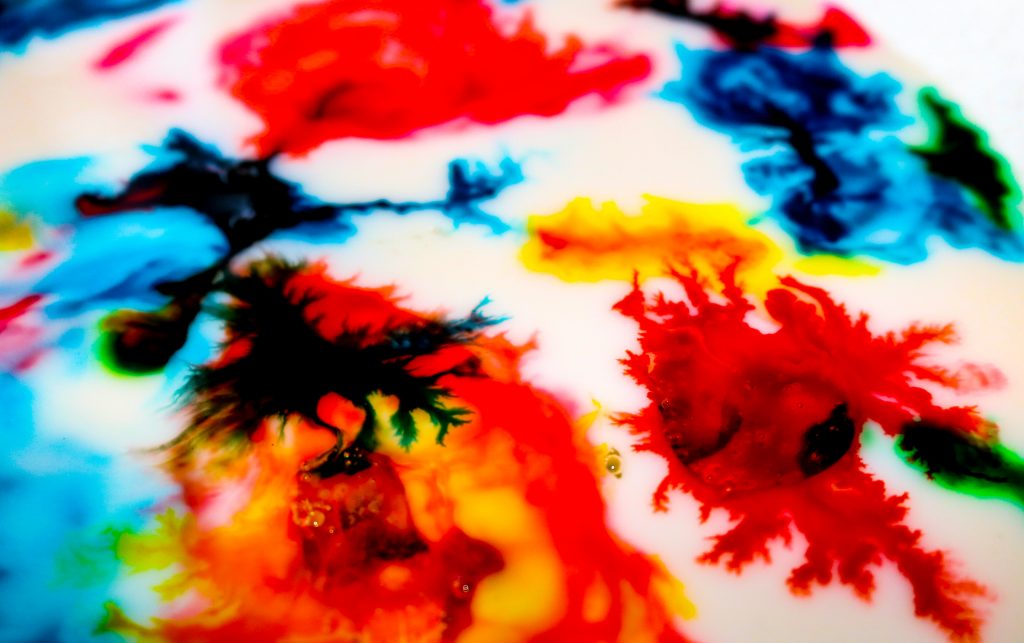 Food colored dye dropped in a shallow circular dish of cashew milk with a splash of dish-washing liquid.

For the third and final team assignment, the group members of Team Alpha decided to divide amongst ourselves and all execute our own projects due to scheduling conflicts. I was inspired by a Youtube video from user AutistiVision, which was published on June 10, 2014. The user poured a thin layer of 2% cow’s milk in a circular Christmas tree tray, soaked a cotton ball in Dawn Dishwashing Liquid in a separate small bowl, and dropped various food colored dyes in a vortex-like pattern (four different colors – blue, red, green, and yellow) in the milk. The user then placed the soaked cotton ball in the center of the tray with the food coloring and milk, and then an interesting phenomenon occured that caused the dyes to mix and swirl around in an erratic, yet, captivating motion for minutes at a time. I attempted to observe and photograph a similar pattern, but my experiment yielded mixed results.

The science behind the cyclonic flow that occurred in the video and in my experiment can be attributed to the surfactant properties of dishwashing fluid and the surface tension of milk. Free fatty acids and proteins appear to be the surface-active constituents causing the surface tension of milk or milk products to be lower than that of water. Specific compounds affect water’s surface tension: Some are are hydrophilic (polar), those that are attracted to water. However, others are hydrophobic (or nonpolar) and repel water. Compounds that lower water’s surface tension are known as surfactants. Detergent (and dishwashing fluid) can lower the surface tension of water as well as milk, which contains water and fatty molecules. Surfactants have a hydrophilic part that wants to interact with the water and a hydrophobic part that wants to interact with the fat molecules. Because of this, when the soaked cotton ball touched the milk, the soap separated the fat from the water in the milk, dissolving the fat. The process can occur over many minutes, finally coming to a halt once all the fat molecules have been dissolved.

For my experiment, I used McCormick’s Food Dye (red, green, yellow and blue colors), generic Target brand dishwashing liquid, and Silk’s Cashew Milk. Right away I inferred that this experiment would yield conflicting results than the Youtube video because of the utilization of cashew milk instead of full-fat cow’s milk. Cashew milk contains much more water than fat molecules, which would produce a more subtle surfactant effect when in contact with dishwashing fluid. The first trial I conducted did not work at all. I poured a thin layer of cashew milk into a shallow plate, dropped food dye in a vortex pattern, and placed the soaked cotton ball in the center. The only dye droplets that warped were the ones closest to the cotton ball in the center (about 1 inch away), yet it was nothing worth capturing on camera. I decided to conduct another trial by pouring the dishwashing fluid directly on top of the food dye droplets and eliminating the incorporation of the cotton ball altogether. Then, after waiting approximately 15 seconds, I began to see finger-like branches forming from the food dye droplets within the cashew milk. This is when I used my Canon EOS Rebel T6i digital camera to take both photographs with the flash on and with the natural lighting coming through my patio window. The best photographs were the ones illuminated with the built-in flash on my camera.

The time the image was taken was 6:30 pm. I was roughly 6 inches away from the plate of milk and food dye when I took the final image. The field of view was about 5 inches across and 3 inches top-to-bottom. The shutter speed was 1/60 (exposure time) using a 50mm lens and a focal length of 32, ISO setting of 100, and aperture of F4.0. The dimensions of the photo are set to 6000 x 4000 pixels. Post-processing was done in Adobe Lightroom, with major alterations made to the whites and blacks, haziness, clarity, vibrance, and saturation of the image. In addition, I decided to crop out the corners of the image so the image would solely be focused on the finger-like vein patterns that were forming in the milk.