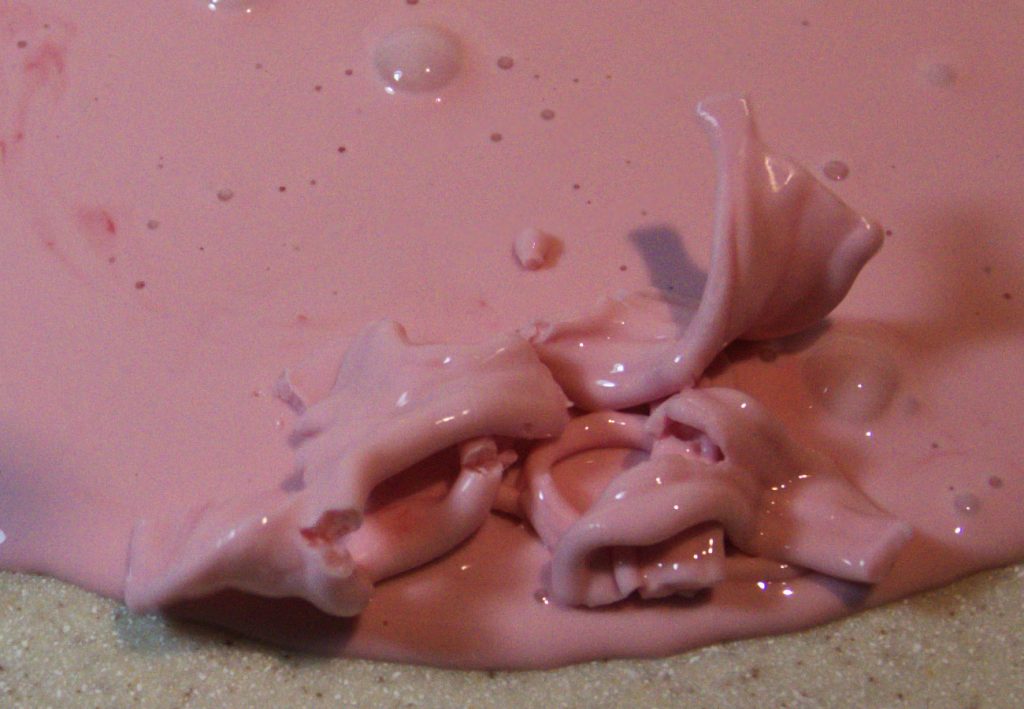 The image is a stream of corn-starch and water mix (non Newtonian fluid) hitting a table. Take a look at how the stream has hard breaks in areas and smooth flows in others.

This is my first image of fluid flow. The focus of this image is the motion and effects of non-Newtonian fluid. More precisely dilatant fluids (aka, corn starch and water). Dilantant fluids are a subset of fluids that as force is applied (shear) the more solid it becomes. In the image there is falling oobleck, corn starch and water, that has regions of solid and liquid depending on the localized stress. This is highlighted in the clean fracturing of the oobleck.

To take the photo a some what runny oobleck must be made. I used one cup corn starch, one cup water and 2 tablespoons beet juice for colorant. Food dye can be used instead but be sure to add two tablespoons of water as well. After the oobleck was made the it was scraped up on a drywall spatula and helped at an angle 8 to 10 inches of the counter surface so the oobleck could flow off. You will observe the oobleck flowing like a viscous fluid on the spatula then become ribbons as it falls off. as demonstrated below.

The shear do to gravitational force acting on the oobleck along the spatula is low enough to allow it to flow easily, but as it flows off the spatula and there is no longer a normal force supporting the weight of the oobleck the shear along the Y axis of the flow increases causing the flow to become solid like. You will observe plastic deformation and finally fracture as the flow falls off the spatula. When the oobleck strikes the table surface, as seen in original post, there will be a brittle fracture do to high shear loads casing the fluid to exhibit greater solid tendencies. Oobleck has this odd behavior do to what is called dilation effect. This means, that in order for the fluid to flow it must expand. It needs to do this because the fluid is just small particles suspended in a fluid, and to flow the particles need to move around each other to do that they must dilatate. If the volume is constrained, this includes surface tension constraints, the particles jam up and cannot flow (Abdoulaye Fall, 2012). This is why you can squeeze oobleck through your hand but if you tray and force your hand in a bowel of it, you feel an almost hard surface instead. this is also why there is a delay in the oobleck from being ribbons when striking the table and then slowly flowing into the puddle that is on the table.

To get the image a white back drop with a neutral surface was used. To can the best contrast a dye is need or the oobleck will blend with the back ground. A black surface and background could be use instead for contrast. Three soft white incandescent lights were used to light the image. White linin towels were used to farther soften the light. For general room lighting halogen track lighting was used.

The image was captured with a mirrorless Panasonic G85 at 16MP, in aperture focus mode. At an F-stop of f/4 and a shutter speed 1/400 s, and iso of 640. The focal length was 16mm. The reason I chose aperture focus was I wanted to control the depth of field. When I went in to automatic mode or shutter mode the camera would focus the depth of field onto the background not the foreground.

The image clearly demonstrates the physics of non-Newtonian fluid, primarily Dilantant fluids. If I did this again I would take the photo with better lighting with a wider depth of field. I felt the photo could be sharper and a lower iso could help with that. I also would pick a more vibrant color as that would be more visually appealing.