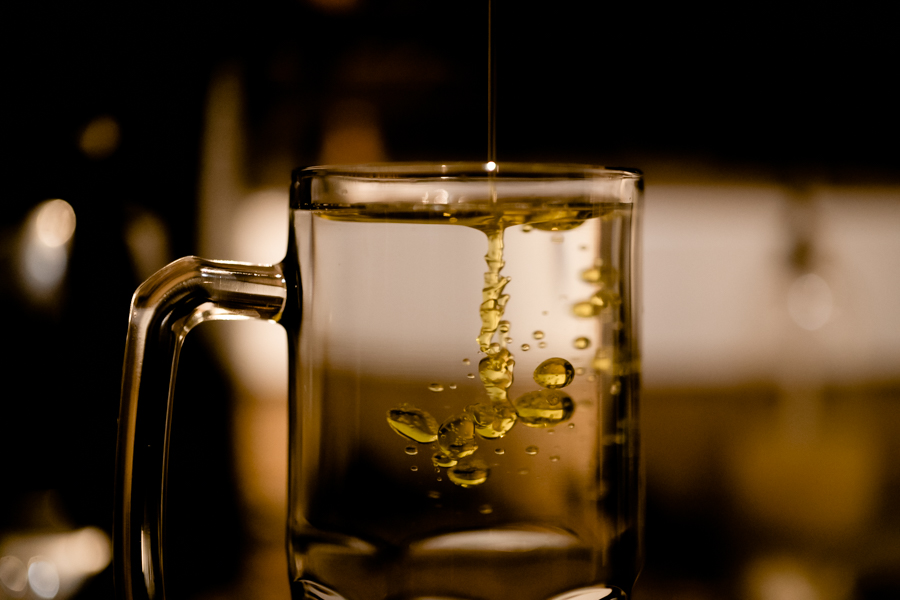 This image shows the interaction of oil being introduced to water.  Both are liquid, but do not mix.  The molecules in the different liquids are not attracted to eachother and will always stay seperate.

The purpose of this image was to get my feet wet in finding a flow-phenomenon that I could setup as an experiment and then photograph.  The resultant factors included figuring out something that may be interesting to look at and using a good camera to produce an image.  The camera itself is a challenge as you must determine all the perfect settings for the particular shot, framing everything, realizing the camera is in the way of you performing the experiment, and so on.  It seems simple, but there’s absolutely a fun learning curve to be had when just starting out.

In this image we can observe the effect of two liquid molecules forcefully placed in the same medium.  The liquid in the mug is water, and the liquid being poured into the mug is olive oil.  Because olive oil is less dense than water, it immediately floats back to the top of the water.

Archimedes’ principle can determine the force of the oil while it is under the water by,

I setup the experiment with the following materials:

The camera was fixed to the tripod and the pointed straight at the mug.  I set the camera to ‘Ch’ which stands for ‘Continuous High’.  This allows the camera to shoot as many photos in succession as the camera allows.  After, I manually focused the lens to focus on the handle on the left side of the mug.  This gave me a reference point in which I would target the pour of the olive oil later.  I used the light-meter on my camera to determine my exposure whilst using a 1/1250 second shutter speed.  A fast shutter speed such as that was chosen so that I may capture a non-blurry moment in which the oil is interacting with the water (or attempting to not interact on some level of thought).  The ISO was cranked up to 4000 and the aperture was opened as wide as possible, to f1.4.  The ISO caused some noise/grain of which I removed in post-editing (I will touch on that later).  The f1.4 aperture allowed me to have really blurry background (called bokeh).  In hindsight, a white background may have been better so that I could close the aperture in order to get more of the oil in the glass in focus.  Another by-product of a wide open aperture (such as f1.4) is that your plane of focus is very narrow.  In this situation at my lens’s minimum focusing distance, there is not much more than a few millimeters in the plane of focus.

Just before pouring the oil, I held down the shutter button with my left hand and then poured the oil with my right.

After taking many photos of repeat attempts, I viewed the images in post.  I found one that I liked and began to touch it up in Adobe Lightroom.  I brought up the noise reduction a little, the sharpness, as well as modified the function curve in order to achieve more contrast.

After all was said and done, I was decently happy with the image.  It had some warm colors that made it pleasing, and was interesting to look at and examine the forces that were occurring as the oil tried to normalize above the water.  If I were to perform this again, I would get more light and change the background to white.  This would allow more contrast and direction of the eyes to the experiment at hand.  However, I think that there is much more that can be done in the world of flow-visualization and am excited to pursue other phenomena.  I have one idea in mind that I’m extremely excited to get into, which is that of coincidental retro-reflective shadowgraphy.