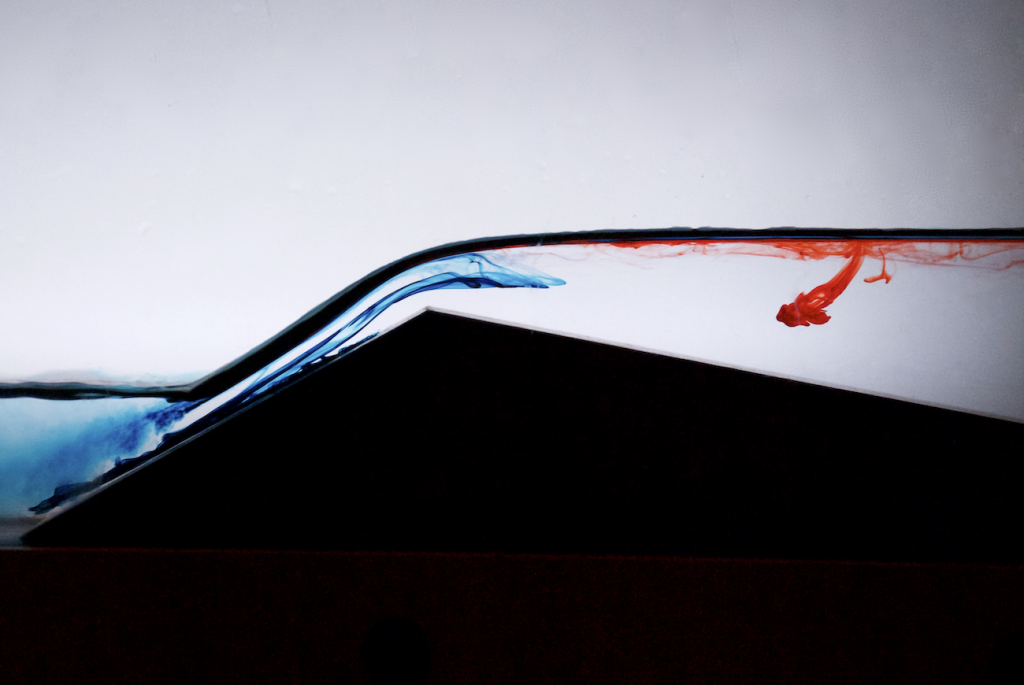 Flow from right to left over an obstacle in a flume shows acceleration into a hydraulic jump.

Smooth Flow Over a Pyramid

As the second project and first one as a team, “Team First” is intended to improve our skills by using all the ideas and tools of each team member. Everyone can help with more complex fluid flow and with a setup that requires multiple moving parts. Our goal was to create an image of a wave from a side view, but we weren’t set on any specific way of making this happen. Professor Hertzberg suggested that we use the CU Boulder ITLL Building flume (explained later). When we finally used it, we found that we could dam up water, then release it all at once and make it hit a wall at the far end, creating a wave. Hana is a master with the camera and took photos from her tripod. Eli was out “Lighting guy” and Ibrahim was our food coloring dropper. I would dam the water and then give a countdown of when I would release it. This allowed Ibrahim to drop the food coloring at the correct moment and informed Hana of when to start taking photos. After taking many photos of the wave, we wanted to try some other things. We found a pyramid shaped block that water could flow over and just had some fun dropping food coloring to see what happened. It turns out that it looked very cool, so I decided to take my photos of this and make some small adjustments to get a good demonstration of the physics and get a superb photo. Thus, it ended up that the rest of the team chose the wave photos, while I chose this flow photo, although the setup was nearly identical.