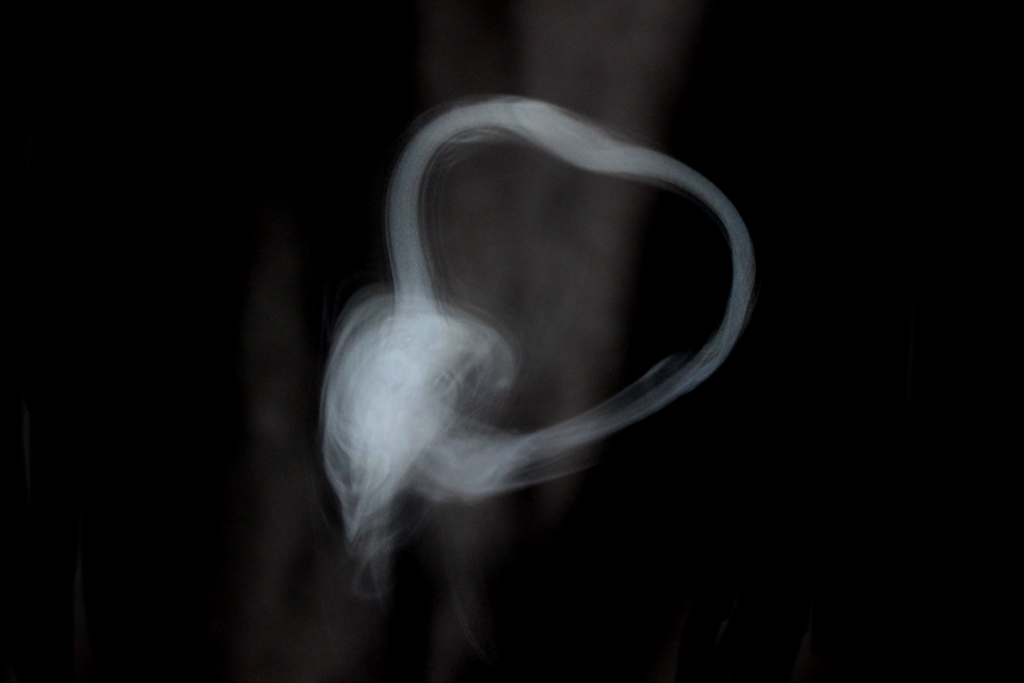 This image was taken for the Second Group Photo.  The image is of a smoke ring that was blown by one of the group member, Chris.  Chris used his vape pen in order to blow this smoke ring.  This image was captured in my garage with only phone lights lighting the smoke.  We used a black sheet as a back drop to help in the post processing phase to turn the background complete black.  For this image we had Will hold a phone light straight onto the smoke, Steven hold a phone light under where the smoke ring was, Chris blow the ring, and Chad take the picture.  We tried to capture a vortex ring that cam out of the zero blaster, but the smoke was not dense enough to capture a clear image, so we ended up having Chris blow smoke rings and were able to capture better images with better sharpness.

In this image we are able to capture the phenomenon that is called smoke rings.  Smoke rings are also known as vortex rings.  Vortex rings are caused by the fluid spinning around an imaginary axis line that forms a closed loop.  In a vortex ring the fluid, in our case smoke, flows in circle paths around the “core”.  The core is the imaginary circle in which the ring is formed.  The angular velocity at the center of the core is the greatest.  The easiest way to form a vortex ring is by injecting a mass of quickly moving fluid into a stationary fluid.  To form our vortex ring, we injected the quick moving smoke into the stationary fluid of air.  The image below describes how the fluid moves in a smoke ring more.

To create this image, we used heavy dense smoke in a dark room.  We used a black sheet as a backdrop as well as multiple phone lights to bring out the white in the smoke in the dark room.  We used my garage in order to have a more controlled environment were we are able to control the airflow in the room.  This was so that we didn’t have any sudden gusts that would ruin our vortex rings.

To create this image, I used my Cannon SL1.  While taking this image I set the F-Stop to f/5, exposure time to 1/100 sec, ISO to 1600.  In the end the image was a total of 5184 x 3456 pixels.  I chose to set everything to their specific settings because I wanted to be able to capture the crisper image that I could.  Another thing that I had to change was setting the camera to automatic focus, once automatic focus was set I had a team member place a finger where we were expecting the smoke to be to focus we were ready to capture our image.

I feel like the image shows the beauty that can be created by a vortex ring.  I really enjoy hoe the image came out.  I feel like the image is able to show the complex flow pretty well.  If I were to redo this image I would make sure that the backdrop is pulled flat.  I would want to ensure that to get rid of any of the reflection off of it in the image.