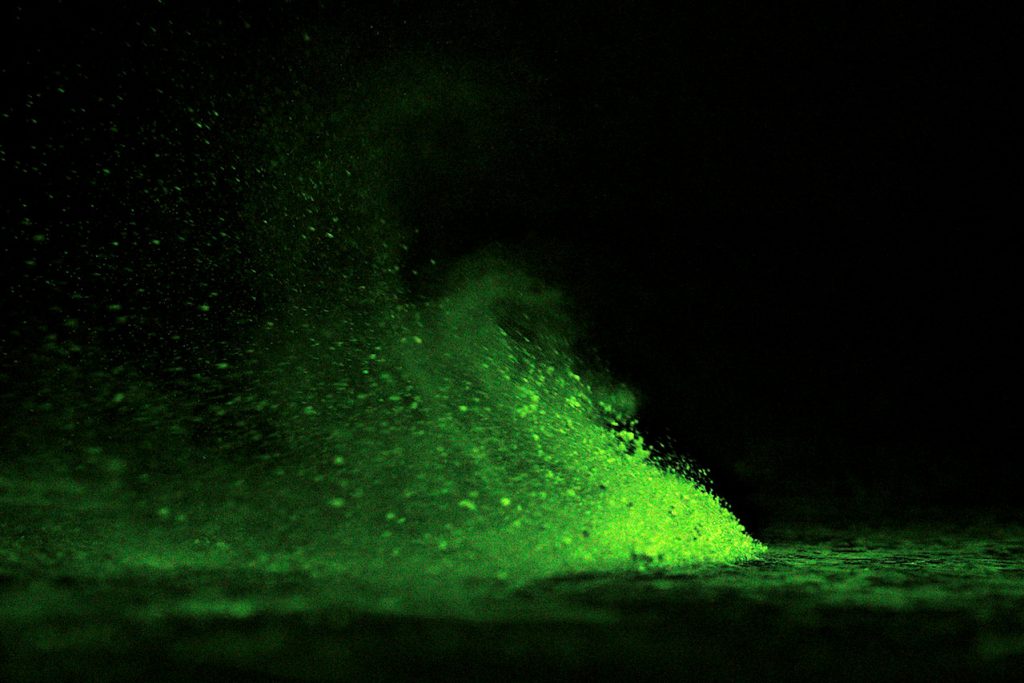 Team second is the second group requirement in this class with the intent being to capture flow as a group as many of these projects require several simultaneous actions to be carried out such as initiating the flow, preparing lighting and operating the camera. Our team opted to demonstrate using chalk dust to seed an impulse of air. In this specific photo, I wanted to capture any vortexes that were formed by the wave of air as it moved over the pile of chalk dusk resting on the table.

All of the images in our series were taken in a small conference room with the fluorescent lights off so that we could control shadows more effectively. As the main light source for these photos, we used a large LED panel to provide very even light with minimal shadows and the panel also allowed us to tune the brightness and hue. A roll of black paper of width 3′ was placed on a table to serve as the surface for our pile of chalk and another piece of black paper was secured to the wall behind the table to provide a black backdrop for the images. For this image, Bison brand climbing chalk was poured onto the surface and formed into a small pile about 5″ in diameter and 3″ tall. A large text book was then dropped from an approximate height of 3′ onto the table surface just out of frame to the right of the chalk pile. This generated a relatively large impulse wave of air that washed over the chalk, creating the flow seen in this image. The camera was operated in a high speed burst mode to capture as many pictures as possible in the short time span that this event was occurring.

Climbing chalk was used to seed the flow of the air impulse as it moved from right to left. Climbing chalk is a fine powder generally made up a mixture of Calcium Carbonate (CaCO3) and Magnesium Carbonate (MgCO3). Bison brand climbing chalk was used because it has a very small particle size compared to other brands of chalk. The typical particle size of this brand is approximately 5 μm while other brands typically fall around 10-15 μm [1]. The smaller particle size is important because the working fluid is air in this case. Air is not dense and, because of that, very small particles are required to correctly track the flow of the fluid. When the particles are more dense than the fluid, they continue to track along a straighter path because the fluid cannot generate sufficient pressure to alter the path of the particles. This phenomenon can actually be seen in this image as the smaller particles track the two vortexes above the chalk pile but the larger particles continue on a relatively straight path to the left of the picture.

The impulse of air created by the falling textbook is best described as a wall jet. Wall jets are characterized by a wave of fluid moving parallel to a surface and it has some interesting boundary flows. The flow contains both a boundary layer and a mixing layer which creates some interesting turbulence [2]. This can be seen in the picture as the two vortexes above the chalk pile. The flow is already unstable as it propagates along the table because it is moving so quickly. When the wave encounters a disturbance such as a pile of chalk, the flow breaks down even more and forms the vortexes. These circular flows are formed when the fast moving air of the wave is slowed by uneven amounts across the height of the flow. So moving air closest to the stationary ambient air is slowed significantly more than the air moving deep within the wave. This creates areas of local low pressure and the air begins to circulate around this dipole. This circular motion can be clearly seen in the photo.

This image was captured using a Sony A6300 camera with a 30mm f/1.4 prime lens. For this picture, the camera was approximately 2′ away from the pile of chalk with the focal length set to 30.00mm (equivalent to 45mm on a full frame sensor) and an aperture of f/2.5. This aperture size was chosen because a fast shutter speed was required so a large aperture was needed to sense enough light but it was not large enough that the depth of field was so shallow that resolution on all of the particles was lost. The shutter speed was 1/2000s to reduce motion blur as much as possible without being so fast that an unreasonable amount of ISO was required. ISO was set to 6400, so a small amount of noise is present but not so much as to reduce the quality of the image to a distracting level. In post processing, the image was first straightened and cropped to center the interesting aspects of the image. It was then sharpened slightly, the blacks were deepened and the the image was give a green tint as I liked the way the bright green stood out against the black background. The unedited photo can be seen below:

Overall I am pleased with the result of this project, the end result looks intriguing and displays the flow well. If I were to attempt to improve upon the idea, I would try using different kinds of chalk to see if there is any difference in how they display the flow and I would also like to try and generate different boundary flows and see how the particles react. One other experiment I would like to try would be to used a much larger pile of chalk and generate a very large wave of air to see the effect that scale would have on the flow.

I also really like how the shutter speed made this picture come out. It was fast enough to freeze individual particles so that they can be visually separated from each other but slow enough that it is clear they are moving at a rapid speed.