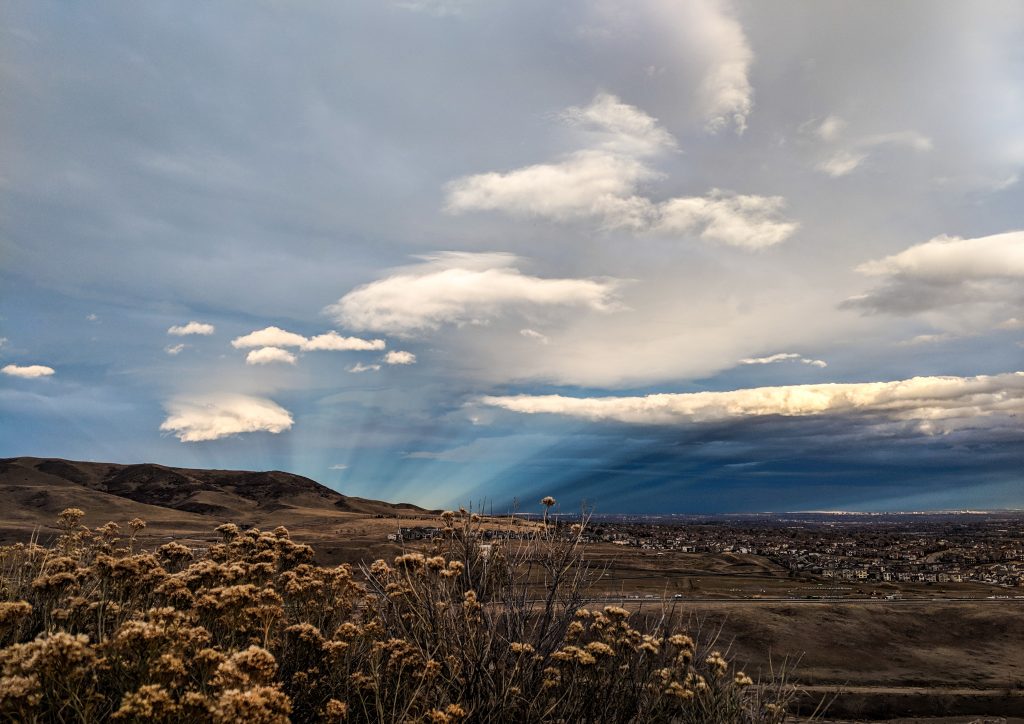 The clouds second assignment is intended to encourage students to continue looking at clouds and taking note of the different types and weather conditions that cause them. Clouds give a good indication of the state of the atmosphere and the flow that they demonstrate can be very complex. The image highlighted in this post was taken in Morrison, CO at 1622 on 4NOV18 looking East from the top of the first hogback.

The clouds show here are Stratocumulus. This picture was taken on a warm day during stable atmospheric conditions as indicated by the measured CAPE of 0.00. The atmospheric data can be seen in more detail in the Skew-T chart below:

The two dark lines are very close together at most elevations. This indicates that the air contained a relatively large amount of moisture. I would estimate that the majority of the clouds seen in this image are at an elevation between 6000m and 10000m because that is where the atmosphere was favorable for cloud formation.

The ray effect seen in the photo are called anti-crepuscular rays. Anti-crepuscular rays cause a similar effect to crepuscular rays but they occur on the opposite side of the horizon as the sun (called the antisolar point) as opposed to the same side. Since the sun was setting at the time of the photo and the perspective is looking East, it is clear that these are, in fact, anti-crepuscular. They appear to converge at a single focal point that is directly opposite to the position of the sun. In this case it looks as if they are emanating from downtown Denver located on the other side of the mountain in the image.

This image was captured using a Google Pixel 2 XL at an aperture of f/1.8. The shutter speed was 1/1462 and the camera used a High Dynamic Range technique to even out the overall lighting in the final image. The focal length was 4.46mm and the ISO was 50 because it was a fairly bright day and little sensitivity was required to create a light image. The resolution of the image is 4032X3024 pixels. Some modification to the image was done in post processing to enhance the colors and make the anti-crepuscular rays stand out more, thought they were still very visible in the original file. Some sharpness was also added to make the rays more prominent. See the image below for the unedited file.

Overall I am happy with how this image turned out. The anti-crepuscular rays are somewhat uncommon and I was glad that I was able to capture them before they disappeared.

I would like to try different editing techniques to see if I can get some more unique effects and I think it would have been nice if I could have gotten to a slightly higher elevation to get a better landscape.