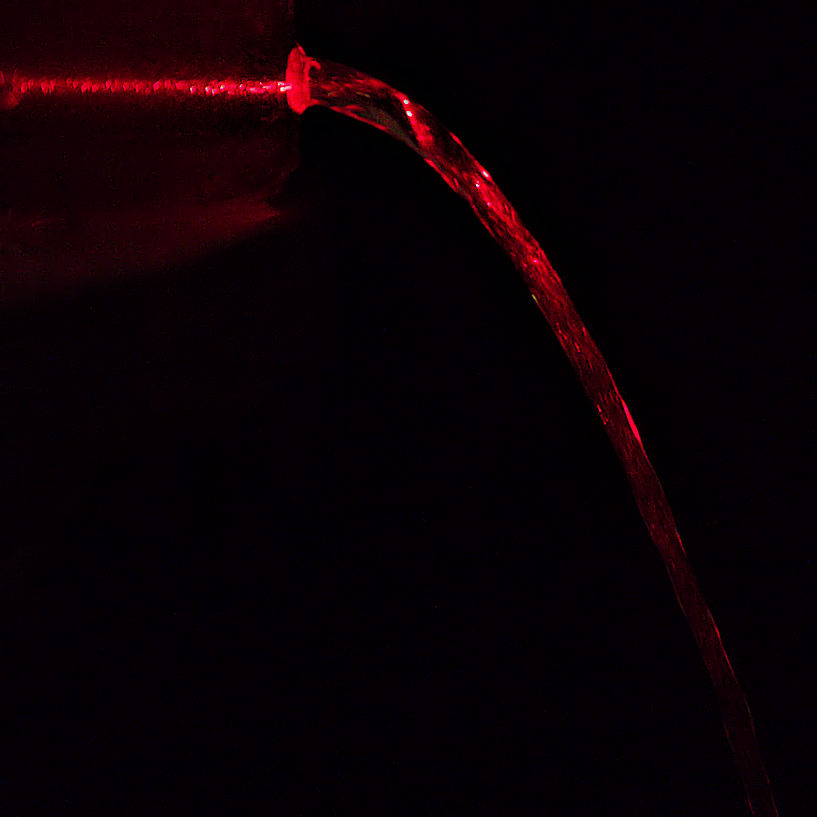 Team third is the final group requirement in this class with the intent being to capture flow as a group as many of these projects require several simultaneous actions to be carried out such as initiating the flow, preparing lighting and operating the camera. Our team wanted to capture an internal reflection of laser light in a laminar flow of water.

All of the images in our series were taken in a small conference room with the fluorescent lights off so that the laser would not be washed out by the external lighting. The laser used in this project was a standard laser pointer typically used for presentations. It proved to be powerful enough to create the effects we desired without presenting a large risk to the vision of the team. Black cloth was used as a backdrop to avoid any distractions in the background of the picture. The container used was a standard, 32oz, Nalgene water bottle with clear sides to allow for use to best see the laser beam within the water. A hole approximately 1/4″ in diameter was created on one of the sides of the bottle with a soldering iron as near to the bottom as possible. The hole was then plugged with electrical tape and the bottle was filled with water. A small quantity of coffee was also added to the water to provided many small surfaces within the fluid for the laser to reflect off of. We found that, with pure water, the laser beam was invisible until the water became turbulent enough to reflect the  light out. This was not the effect we were going for so we added the coffee to show the laser throughout the whole path. The laser was then shined through the side of the bottle towards the hole and the tape was removed. The draining water was then caught by one of the teammates to prevent excessive spilling. The camera was operated from the side in a single shot mode and using manual focus because the auto focus had difficulty fixing the water stream and tended to hunt around.

The major phenomenon displayed within this picture is known as a total internal reflection. This occurs because of the differing optical properties of air and water. The primary reason this happens is because light travels at different speeds in different mediums. In this case, light propagates at approximately 2.25e8 m/s in water and 3.0e8 m/s in air. These are often described as a substance’s index of refraction, which compares how quickly light propagates in a vacuum versus the studied substance. Water has an index of refraction of 1.333, meaning that light travels in a vacuum, 1.333 times the speed it travels in a vacuum. When a beam of light interacts with the interface between two substances with differing indexes of refraction, the beam bends. When the light is traveling at a shallow enough angle to the interface, part or all of the beam will be reflected off of the interface and will not exit the medium. The angle at which all of the light reflects back into the original material is called the critical angle. As can be seen in this image, the entire beam of light can be reflected back and forth until it dissipates in turbulent flow or it reaches a steep enough angle that it exits the flow. The critical angle of water and air is 48.6°, so any time light hits the interface at any angle less than 48.6°, total internal reflection occurs [1].

This image was captured using a Sony A6300 camera with a 30mm f/1.4 prime lens. For this picture, the camera was approximately 2′ away from the stream of water with the focal length set to 30.00mm (equivalent to 45mm on a full frame sensor) and an aperture of f/1.4. This aperture size was chosen because the shots were taken in a dark room and the sensor needed as much light as possible to resolve the laser in the water. The shutter speed was 1/640s to reduce motion blur as much as possible without being so fast that an unreasonable amount of ISO was required. There were some interesting composition effects caused by different shutter speeds as well. If the speed was too fast, the light appeared discontinuous but if it was too slow, there was significant motion blur. ISO was set to 6400, so a small amount of noise is present but not so much as to reduce the quality of the image to a distracting level. In post processing, the image was first straightened and cropped to center the interesting aspects of the image. It was then sharpened slightly, the blacks were deepened and then the red color of the light was boosted to give it a deeper hue to make it stand out well against the black background. The unedited photo can be seen below:

Overall I am pleased with the result of this project, the end result looks intriguing and displays the internal reflection well. If I were to attempt to improve upon the idea, I would try using a more powerful laser and possibly different colors of lasers. I think that a larger container for water and a longer output tube to create a more laminar flow would be beneficial so that more bounces could be captured before the turbulent flow interfered. I would also like to experiment with different mixtures within the water to see how they affect how the laser appears.

I also really like how the shutter speed and focus made this picture come out. It shows three reflections fairly well. I also like how the particulates in the water give the laser a fuzzy look.