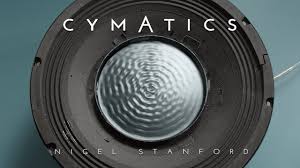 Nigel Stanford and his production crew used flow visualization of different media such as sand, cold vodka, ferrofluid, and fire to artistically represent synesthesia and physically demonstrate the relationship between sound and science.

They use a Chladni’s plate covered in sand to show modes of vibration and their associated nodal lines (lines where no vibration occurs). Each pitch, which is amplified using the speaker below the plate, causes the plate to resonate. Because of this resonation, the sand on the plate forms a complex yet clean geometric shapes.

The speaker dish full of chilled vodka works similarly to the Chladni plate. However, this also utilizes a technique known as aliasing which is the misidentification of a signal frequency. The speaker moves up and down creating a wave which moves radially inward. The camera’s frame rate is intentionally chosen to match the speed (or a multiple thereof) at which the waves appear. This causes an effect that makes the liquid look like it is “frozen”.

They used ferrofluid in conjunction with electromagnets connected to certain keys on the keyboard so that, when the notes were played, the electromagnets would turn on and the ferrofluid would become attracted to the magnets. This creates visually appealing shapes along the magnetic lines.

Another captivating experiment uses a Rubens’ tube to graphically show the relationship between sound waves and sound pressure with fire and standing waves. When tones are created that match the resonant frequency of the tube, high and low pressure zones of gas are created which directly changes the height of the flame.

Link to the video