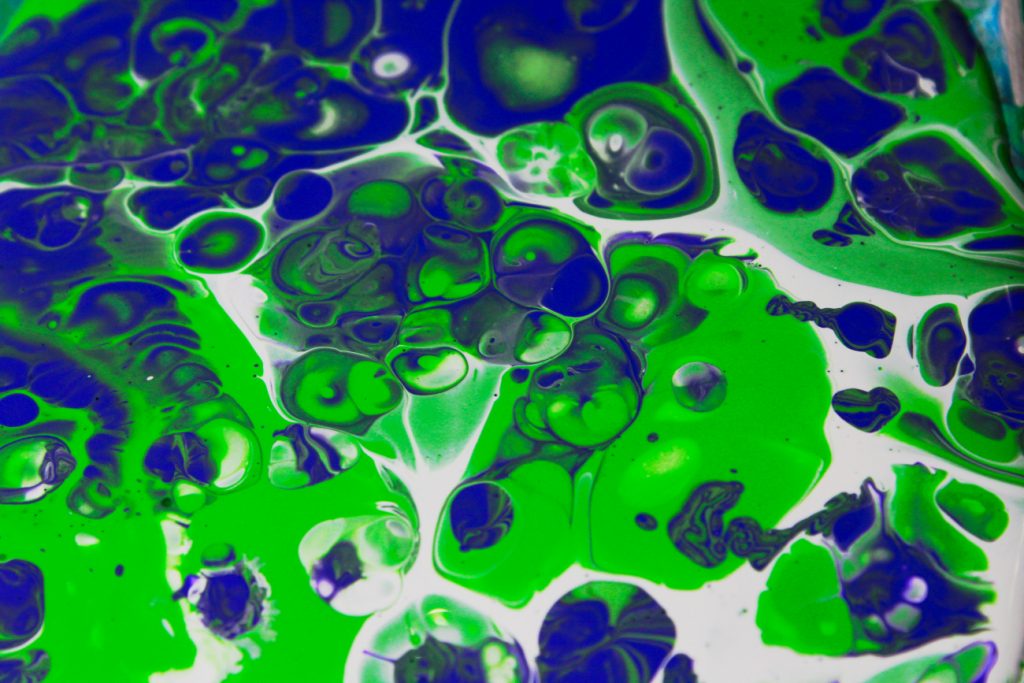 Team four decided that for our first team photo we wanted to capture and understand the captivating phenomenon known as acrylic pouring. This image was chosen to clearly illustrate the bizarre nature of the Rayleigh-Taylor instability in this medium. The experiment was originally intended to create this phenomenon using acrylic paint and dish soap. However, after numerous failed attempts the experiment was repeated with silicone-based additive to create cells. Ryan Weatherbee assisted me in mixing the paint with the silicone oil as well as holding the lighting to capture the image without glare and oversaturation.

The paint was poured onto a 6” by 6” canvas. Three plastic shot glasses were filled halfway (approximately .75 oz) with acrylic paint (purple, green, white) and filled the rest of the way with water in order to dilute the paint. The mixture was stirred in order to create an even consistency; this step was meant to mimic the effect of a specific pouring medium called Floetrol. After the paint-water mixture was created, two drops of Astroglide silicone lubricant were added to each shot glass and minimally stirred. The paints were then carefully poured into a larger cup known simply as the flip cup in order of decreasing density: purple, green, and white on top. The canvas was set atop of the flip cup and the assembly was flipped in one swift motion in order to complete “a dirty pour”. The cup was immediately pulled vertically upward allowing the paint to escape in a rapid radial slosh (Figure 1). Within 30 seconds cells began to appear and grow larger as the paint sheared out covering more of the canvas. Any remaining mixed paint in the cup was poured out to cover blank spots on the canvas.  The canvas was then picked up and tilted from side to side in order to cover the corners.

Each color of paint has a different density due to its particular chemical composition. When the densest color sits atop of the less dense colors, the densest color sinks down, causing the less dense colors to rise to the surface. This causes the paint to mix, creating plumes and spikes as shown in Figure 2  (Art, 2018). Different density disparities would cause different structures and shapes of the Rayleigh-Taylor instability. The acrylic paints are water based. So, when the silicone oil is added, the layers tend to separate, thus aiding in the instability as the silicone rises to the surface (Hoelscher, 2018). According to a study performed by Zetina, Godínez, & Zenit, “… flow is dominated by viscous effects since the fluids are highly viscous and the spreading velocity is small. Therefore, for all cases tested, the Reynolds number is very small (Re < 10−3).” Furthermore, they found that surface tension does not significantly contribute to the production of acrylic cells – the most significant driver is the density disparity (Zetina, Godínez, & Zenit , 2015).  Based on the similarity to their experimental set up and finding that black acrylic paint had a Reynolds number of 2.1 X 10-6 , I would approximate the Reynolds number of the paint to be on the same order of magnitude and, therefore, laminar.

This experiment showed how liquids of similar viscosity and material properties, but slightly different densities, interact when layered on a surface. In order to visualize this, each individual paint with a particular density has a unique color. Since all three colors significantly contrasted, it was easy to visualize how these liquids formed the cells discussed in this experiment. One 18-Watt (1260 Lumen) light was held above the canvas and the picture was taken from about one foot away. The shot was captured using a Canon EOS Rebel T6 with a speed of 1/100, the aperture was set at F9, and the focal length was 55mm the ISO was set to 320.  The picture is 3456 x 5184 pixels.   The shot was focused to include the entire length of the canvas and focus on cell cluster in the middle of the frame. The picture was photo-edited in Gimp and changed the curve to the following (Figure 3).

I really like how the image shows so many different cells of different sizes and shapes. I think that the different combinations of colors in each cell also adds a unique feel to the image. The image made me wonder how the cells would look with significantly more paint colors. If I redid this photo I would use more distinct colors.

Hoelscher, C. (2018, 3 3). Why I Don’t Use Silicone in My Acrylic Pour Paintings . Retrieved from choelscher art: https://choelscherart.com/dont-use-silicone-acrylic-pour-paintings/