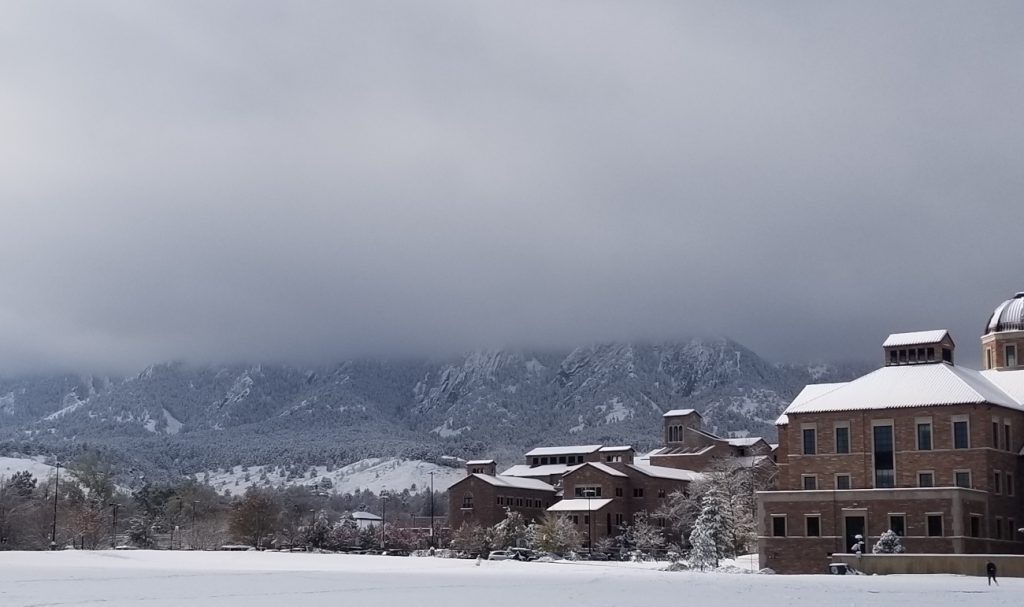 This assignment was meant to capture interesting clouds and phenomenon in the sky. Although my favorite clouds are puffy cumulonimbus clouds, this was an instance in which the clouds were just so visually striking that I could not resist the opportunity to capture these. I intended to capture how prominent these clouds were and that they covered the upper half of the Flatirons entirely in grey while allowing the bottom half to be visible. I hoped to show how perfectly horizontal the layer of clouds was.

I shot this photo on my way to class at 12:54 PM passing by the business field on the day of the snowstorm which canceled school (11/28/19). The Flatirons are known as the geographic indicator of West. The camera was not particularly angled as I intended on keeping the layers of the photograph as straight as possible and needed to shoot a very large field of view (for reference the Flatirons are at an elevation of 8,148ft or 2,484m).

The picture captures the stratus clouds further away from the mountains and fog where it contacts the mountain. The stratus clouds form because the air rises and progressively cools until the air can no longer hold the water vapor it did before when it was warmer. As a result, the vapor condenses and forms a cloud (University Corporation for Atmospheric Research , 2009). Stratus clouds are low level (0-6,500 ft.) clouds with characteristically level bases formed by radiative cooling. Stratus clouds are called fog when they reach toward, or form on, the ground (Nenes, 2014). The stratus clouds (and fog) have low levels of turbulence. The CAPE value in the Skew-T diagram (Figure 1) is 0.000 which indicates that the cloud formed in a stable atmosphere.  The diagram confirms that the clouds formed around 2,000m which is within the characteristics of stratus clouds.

The clouds in the surrounding directions speckled an otherwise blue sky which was a very surprising contrast (Figure 2). At the time, it was around 25°C with roughly 7mph winds blowing 350° from North to South. (Time and Date, n.d.) However, a few hours later there was a deep snow.

Figure 2: Appearance of the rest of the sky

The picture has a field of view of a couple thousand feet vertically and a few hundred horizontally. The mountains are maybe a mile or two away from my location on campus. The photo was taken with a Samsung galaxy S8. The photo was captured with f/1.7, a lens focal length of 4.25mm, ISO set to 50, and an exposure time of 1/9615 sec.  The picture is 3306 pixels by 1960 pixels.  The only manipulations I did in post processing were to crop the image slightly smaller to focus on the clouds and the contrast with the building, ground, and mountain (Figures 3 and 4).

I like this photo because the snow makes the contrast of the building really pop! I think that it is also visually appealing because it almost follows the rule of thirds between the sky and the mountain/ground. I had never seen the mountains blanketed by clouds so sharply and evenly and I think this picture does a good job of portraying it. I wish however that the picture was slightly more realistic in terms of the color of the sky; I do not believe that the camera did the colors justice. If I had the chance to retake this picture, I would spend longer trying to manually adjust the contrast settings and play around with the colors.

Nenes, A. (2014). Clouds. Retrieved from Georgia Institute of Technology Clouds and Precipitation: http://nenes.eas.gatech.edu/EAS8803/Clouds.pdf