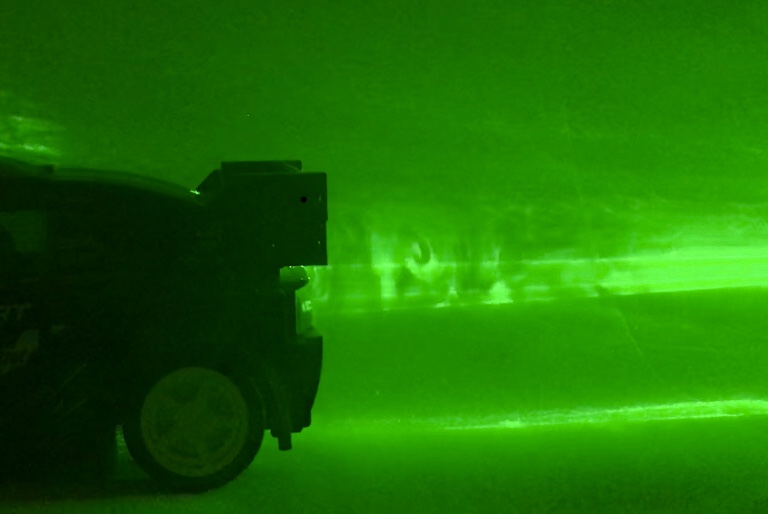 This image captures the vortices trailing from a LEGO car in a DIY “wind tunnel”. A green laser shining at a custom-built motorized beam splitter creates a laser sheet. The particle tracer is extremely fine titanium dioxide, generated from the chemical reaction of titanium tetrachloride (TiCL4) with moisture in the air. The titanium tetrachloride (liquid at room temperature) sits in a shallow dish, and air is blown over it, carrying the generated titanium dioxide particles with it. This air stream then passes over the model car.

The LEGO Ford Fiesta M-Sport car was built by Kailey Shara from an off-the-shelf LEGO kit. Kailey Shara built all apparatuses used, and shot and edited the final image. Special thanks to the CU Boulder Laboratory for Emergent Nanomaterials for providing the titanium tetrachloride and fume hood in which to safely perform the experiment. All necessary safety precautions were taken for handling titanium tetrachloride within a large high-flow fume hood, as well as the corrosive hydrogen chloride (HCl) gas produced. This experiment should only be undertaken by trained personnel with the requisite equipment.

EXPERIMENTAL SETUP: In the top-left image, air is injected via a plastic hose over a shallow dish containing titanium tetrachloride. Titanium chloride reacts with moisture in the surrounding air to produce an extremely fine mist of white titanium dioxide along with hydrogen chloride gas. At right is the green laser, whose beam is incident upon a fully-LEGO beam splitter. Within the same laser assembly, a LEGO EV3 Medium Motor powers a two-stage gear multiplier such that the beam splitter spins at approximately 3,750 rpm. This generates the sheet of green laser light that makes it possible to see the trailing vortices.