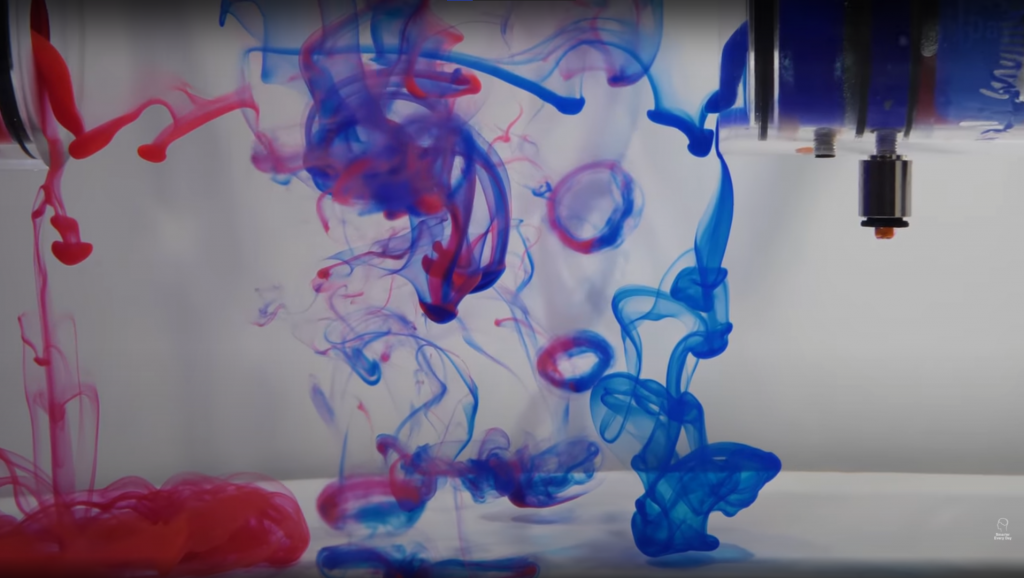 This video shows the interaction of two vortices colliding with each other head-on. The result of the collision is the two vortices spread out and create a disk that then disperses with interesting structures along the edge of the disc. The goal of this project was to recreate an experiment performed in a paper published to Nature in 1992 in order to better film the interactions with more modern cameras. This experiment was the specific case of the structures along the edge of the disc being new vortices traveling radially outward. All of the videos of different test runs are all beautiful in the unique way that the vortices and structures interacted in each run. The mixing of the colors and the highly intricate structures that form look amazing and show how wonderfully complex fluid flows can be. The larger primary vortices breaking up and forming the smaller vortices is a process called reconnection (reconnection is the general process of vortices breaking up and forming new vortices), and is a topic still studied today. Another interesting point brought up in the video is that there was another paper that tried to recreate this interaction in a fluid simulation but was unable to have the simulation create the new radially outwards vortices. The simulation only resulted in clumps of fluid flow moving radially outwards, but they were not vortices. The experimental setup for this video took years to tune in order to achieve the results shown in the video, but those years of work really paid off with this beautiful video of very intricate flow.