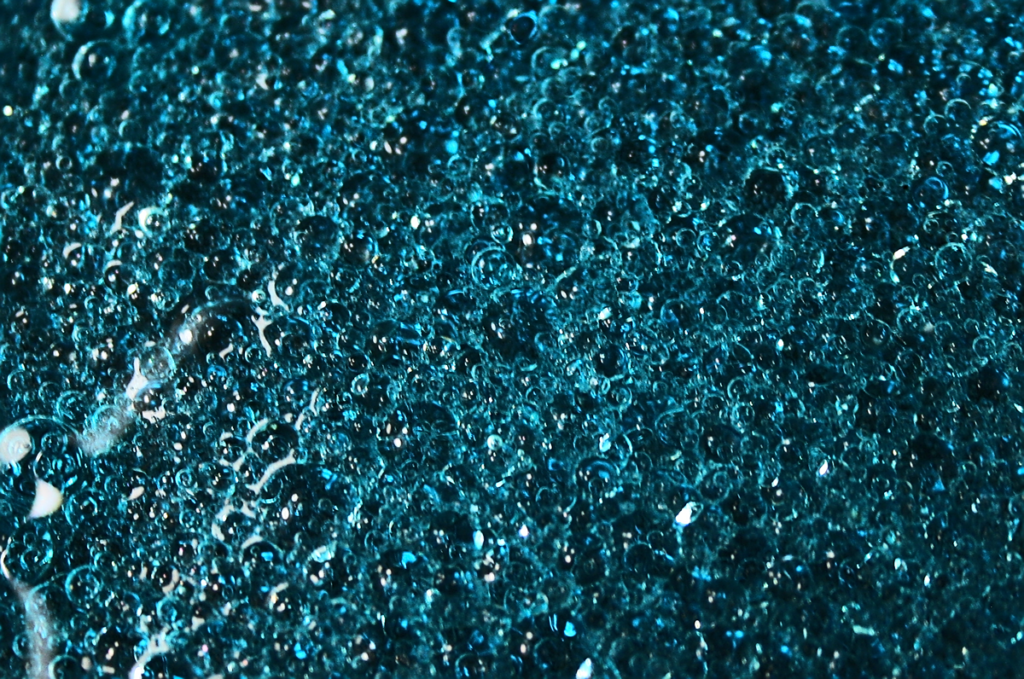 A thin layer of bubbles were created by stirring peanut oil into blue food-dyed water. It was lit from above with two desk lights to highlight the sparkling reflections in the oil bubbles.

Collaboration and inspiration from John Whiteman

I took this image after trying to capture food dye precipitating out of stirred up oil droplets into water. The original idea, inspired by John Whiteman’s Get Wet project, was to capture the streams of food dye from the side diffusing into the larger reservoir of water. Due to attempting it in a wine glass, I wasn’t able to get any clear shots of that phenomenon, however once the water had been dyed enough to turn a dark blue, I noticed how freshly stirred oil bubbles looked beautifully sparkly against the dark blue backdrop. I was able to get a much clearer photo from above, without any curved glass in between the camera and the fluids.

The equipment used to create this flow phenomenon wasn’t very complex, just a wine glass and a fork to stir up the oil into small droplets that gradually rejoined over time.

The transient state of the oil bubbles cause irregular, non-spherical bubble shapes, a few of which are captured in the photo. Surface tension forces cause the bubbles to minimize their surface area, explaining the bubbles’ dependence on their neighboring bubbles’ size and shape to define their own shape.

Blue food dye was used to color the water, and the peanut oil was stirred vigorously into the blue water to achieve small oil bubbles. These quickly began rejoining, and the photo was taken shortly after stirring. A desk lamp with two bulbs was used, both pointed at the subject, with the lamp located about a foot away from the subject and facing about 60 degrees to the right in the same plane as the camera’s view.

The original image included the sides of the wine glass, which could have been interesting to include, emphasizing more circles in the work, but I prefer this version, cropped just inside the rim of the glass, especially because the background wasn’t the cleanest. The subject was about a foot from the lens. The raw image was 3888 by 2592 pixels, and the cropped and edited image was 2076 by 1376 pixels. The camera used was a Canon EOS Rebel XTi, with a focal length of 45mm, an exposure time of 1/50 sec, and an ISO speed of 400. The original image:

I really liked the aesthetic quality of the processed photo, despite the fact that it was a completely different result from what I set out to accomplish. At a basic level, bubbles aren’t the most interesting fluid phenomenon I could’ve captured, but the transient state of these bubbles of oil added a deeper level of fluid mechanics that was interesting to witness, especially when zooming into the photo. I learned a lot from this first project: curved glass isn’t optimal to photograph through, backgrounds can make or break the photo, and sometimes the most interesting possibility with a project is completely different from what you set out to do.