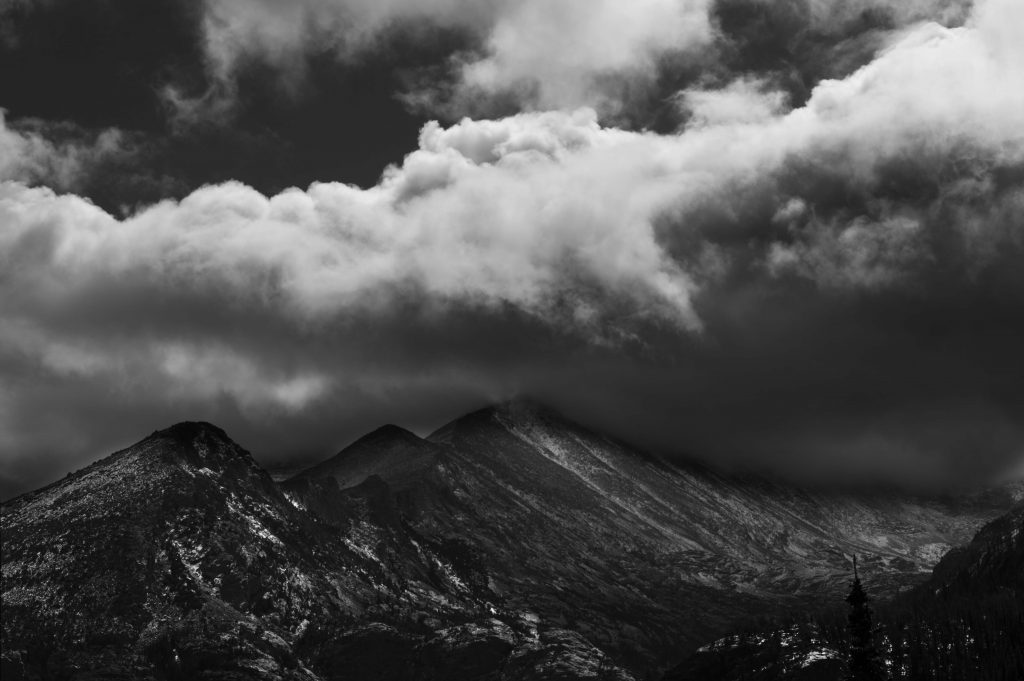 Cumulus clouds hanging on the tips of mountains in Rocky Mountain National Park on September 24th around 10:45 am.

The purpose of this class is to visualize flow phenomena. For this image, we were tasked with taking pictures of clouds. Due to the many variables present in the physics of clouds, there were many distinct images submitted. For my submission, I photographed cumulus clouds hanging on the tops of mountains.

The image was taken in Rocky Mountain National Park (RMNP) during the descent of the Emerald Lake trail. The image overlooks Glacier Gorge, facing South-West. I was standing at about 9,500 ft in elevation, while the valley floor seen is at about 8,500 ft (National Park Service, 2016). The image was taken on September 24th, 2016 at about 10:45 am. Previously in the day, it had been raining/snowing lightly and the whole valley was filled with fog. This point in the day was the first time the clouds lifted to give a view of the valley. The clouds, being cumulus, were fluffy and full of detail, which I attempted to convey through this image.

Cumulus clouds are low atmosphere clouds that form often from cold fronts. In this case, a cold front likely hit the mountains which forced it upwards. When the colder air hit the warmer air above, this caused the warm air to condense, forming the cumulus clouds seen in the image. Judging from the image, it is clear that the clouds are low, around 3,000 m above the ground. This is another indication that the clouds are indeed cumulus (Hertzberg, 2011). The Denver skew-T plot is the closest atmospheric sounding data available for RMNP and the one for Sept. 24th is seen in Figure 1 below (University of Wyoming, 2016).

The CAPE value for the day was 0, indicating a very stable atmosphere for the Denver area. This stability would be conducive to stratus and cirrus clouds. However, locally in RMNP the clouds were mostly cumulus. Earlier in the day it had been raining and snowing. Though this is indicative of an unstable atmosphere, the mountains have a large influence on the local weather. The orographic features forced local instability, resulting in the puffy, cumulus clouds and the inclement weather present during that day. As I remember, Boulder had fair weather that day, so the stability indicated by the skew-T is reasonable.

To be perfectly honest, this was the first weekend I had had my camera, so many of the settings were experimentally chosen. At this point in the day, the sun was out and provided ample light, allowing for a lower ISO. The shutter speed was at a fairly medium value. These values were just the best combination of settings that I tried at the time (again, I was new to my camera). Other specs of the image can be seen in Table 1, below.

Below is the original, unedited image (Figure 2). To the right is the final, edited version (Figure 3). During post processing, I really wanted to keep the details of the clouds, while still showcasing the mountains and the valley below that allowed the clouds to form. I increased the contrast as much as possible to get the details in the clouds. This darkened the mountains too much, so, using Photoshop, I brightened the bottom half of the image a bit. Finally, I messed with the exposure settings a little bit until I was satisfied. Though the original image has a bright, happy and colorful feel to it, the entire hike was dreary and cold. I wanted that to be evident in the cloud image, so I applied the black and white filter in Photoshop. I didn’t want the blue of the sky to mask the fact that it had been raining and snowing all day.

Overall, I am very pleased with the outcome of the image. I feel it conveys the emotions I felt that day: cold, yet perfectly content. The details of the image really show the depth of the cumulus clouds. I wish that I could have showed the shadows on the mountains more realistically (meaning I need to develop my Photoshop skills further). I would also like to know the makeup of the atmosphere locally. I think it would be interesting to see the details of how those clouds were formed. I found I really enjoyed photographing mountain clouds. I love putting them in black and white. I think this is something that could become a hobby of mine.