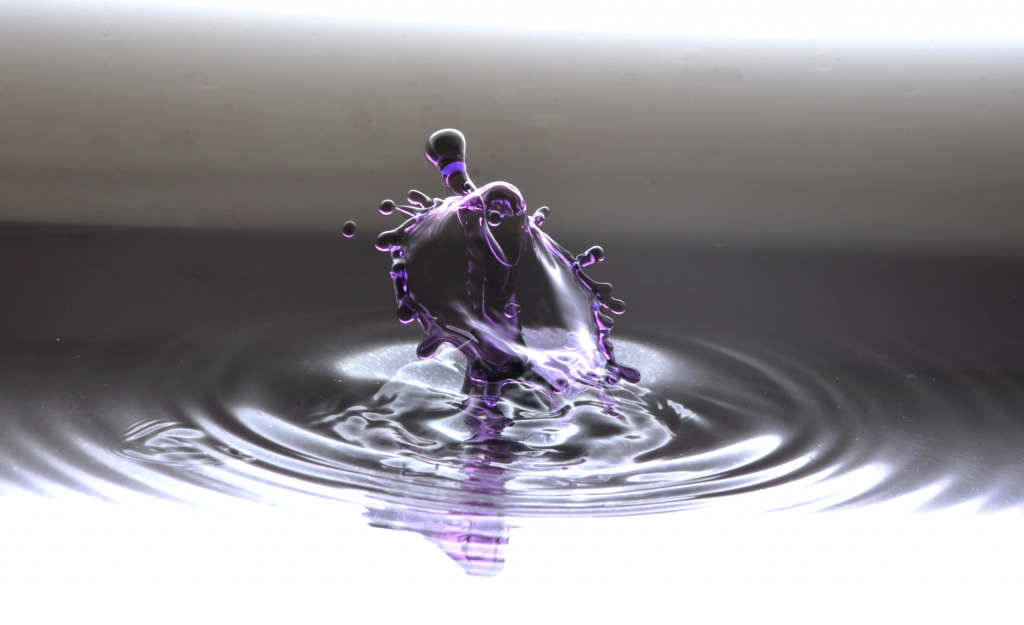 By Stephanie Mora for Get Wet 2016

A Worthington jet is formed when a droplet falls with enough velocity on a liquid surface (Inglis-Arkell 2015). The droplet creates a crater in the liquid surface and from the center of that crater protrudes a central jet and with enough energy the jet will pinch off and send more droplets upward (Inglis-Arkell 2015). This is the main phenomena I was trying to capture in my Get Wet image, but on top of that, I wanted to capture another droplet hitting that Jet and creating a crown. I was only able to capture as good of an image as I did thanks to an apparatus created by Kyle Walters and Kyle Hollis and a Bluetooth app called dropControllerBT designed by Martyn Currey.

The apparatus they built stood on two metal legs and could have up to three horizontal bars attached between the legs. On any one of the horizontal bars (preferably the highest one) you could then attach 3 liquid containers, each having a tube connected to a dripper. The drippers would be fixed on one of the 2 lower bars. Positioned below the apparatus was a basin of water, approximately a foot and a half in length, 8 inches wide and 4 inches deep. Directly in front of the apparatus was a camera on a tripod which was connected to a circuit box also built by Kyle and Kyle. The circuit box was connected to the drippers and two flashes that were placed on the left and right side of the basin. Everything connected to the circuit box was controlled by the dropControllerBT app. The app allows you to control the opening of each valve, drop start time (in milliseconds), size of drop (controlled by how long valve is open), time in ms when the flash will go off, and the time in ms when the camera will go off (Currey 2016). All of these settings could be customized differently for each valve.

In our trials we noticed that tilting the valves at an angle seemed to cause the Worthington Jet to come back up at an angle. When the second droplet was dropped it hit the middle of the jet as opposed to the top, creating a crown over the middle of it. Through the crown you can still see the jet and how it extends taller than the crown. On the tips of the crown you can see where droplets are being pinched off and extending outward.

In order to bring emphasis and aesthetic appeal to the droplet, we used purple food dye for the droplets. The basin of water did not have any dye in it. To control light we had two external flashes with just white light. In other trials, we had put red and blue filters on each flash, but for this image, the flash did not have a filter. In the room we were in, we had the normal ceiling lights on as well.

Because I did not have the proper cable to connect my small Canon PowerShot SX260 HS to the circuit box, I used their Nikon D700. The camera was placed about 7 inches from the basin, positioned so you could not see any borders of the basin, just the pool of water. We exclusively relied on external flash and lighting. The f-stop used was f/22, an ISO of 400 with a ½ second exposure and the focal length was 105 mm. As I mentioned earlier, these settings produced an image that was too bright and looked a bit washed, especially the purple. This was not our intention, we were playing around with settings and this happened to be the set that actually captured a beautiful drop collision. To add vibrancy back to the photo, I used Gimp to increase contrast and used the burn tool around the droplet collision to bring out the purple. I also cropped the photo to make the focus more central on the droplet collision and remove other distracting boundaries. From previous trials, there were a few droplets on the stuck on the backdrop, which I removed using the clone tool.

My favorite part about this image is the aesthetics of the drop collision. Also, how the crown is transparent and the jet below can be seen. I love the contrast of the purple with the black and white surrounding it. I also love the contrast between the calm ripples and the crown that is spreading out in different directions. I believe that the physics are very well and clearly shown in this image. Neither I, nor the two Kyles understood exactly why the drop was coming up at an angle, because even when we did straighten the angle of the valve, it still came up at a left tilted angle. But this ended up working in our favor. As a non-engineering student, the only improvements I could think of would be incorporating more colors. I would want to drop different colors onto each other and try to capture the blending of those dyes in the droplets. Another idea I would want to do would be having multiple droplets fall side by side, in different colors, and then try to capture 2 or 3 droplet collisions at the same time. The precise controls allowed by the app we used would make it possible to capture such an image.