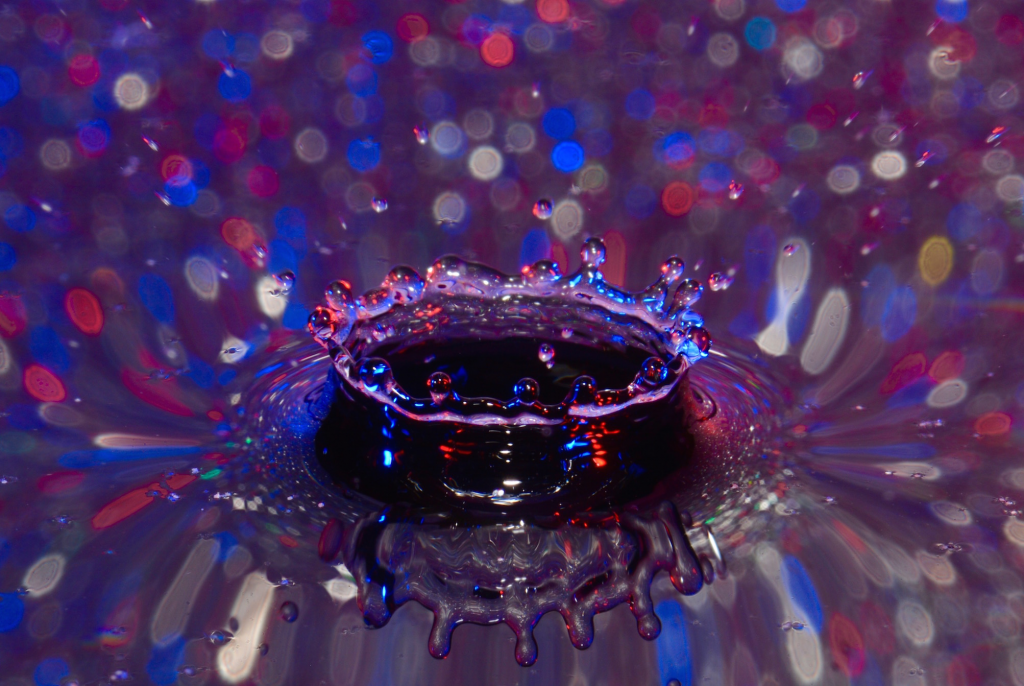 Water droplet splashes into a deep pool of water, creating a crown and distorting the reflection of the colorful background.

The first project was to take a picture that had to do with flow visualizations; it was titled ‘Get Wet’. The criteria was very open to the photographer and left everything to their creativity and interests. This photo is a droplet of water hitting a shallow bucket of water, which showed the crowning effect that occurs when a droplet hits a pool of still standing water. This was the phenomenon the photographer wanted to achieve. The photographer also wanted to show reflectivity of the water by multiple flashes and an interesting background.

Photos of the apparatus are shown in Figure 1 below. A dropping devise was created for this purpose specifically. There were two rods attached orthogonally to one another, so the photographer could adjust both height and horizontal length. Attached to the horizontal bars was a dropper apparatus, made from pipe fittings and an eyedropper. Which would drop droplets of water fast or slow depending on the setting.

The camera setup was fairly simple, using a 105 micro ‘macro’ lens and a tripod also with three synchronized flashes. An SB 600 Commander controlled the flashes; two of the flashes were pointed at the background, which was a grey glittery paper, and the other flash was pointed at the location of the droplet impact to freeze the motion. The camera was set on Aperture priority and had an ISO of 200 and an aptitude of F-25 and a shutter speed of 1/60th.

The phenomenon of water dropping into a pool of water can show three different effects: the drop bounces and then floats to the pool’s surface, the drop blends into the pool, or the drop splashes forming a crown or crater. The density, the velocity, surface tension, and the diameter of the droplet, in forms of the Weber number, determine which splash will occur. The Webber equation is  We = roe*d*v^2/sigma.

When the Weber number is greater than ~84, the impact creates a crown or a crater. Whether a photograph is of a crown splash or a crater splash depends on when the photo is taken, a crown is developed first, then forms into a crater.

The visual technique used was a flash to freeze the motion, displaying a crisp image of a moving object. Also, for a visual flare, a glittered piece of paper was used as a background to add an artistic view. With two flashes pointing at the background with red and blue color gels over the flashes, the colorful reflection of the water was obtained.

The photographer wanted a large depth of field. A flash was used to freeze the motion and get a very focused image. A macro lens was used to get a close view of what was happening in this phenomenon. The image was edited slightly; a cropping of the image was done to get an even closer view than the macro lens could provide. Also, the photographer adjusted the brightness of the image slightly to make the colors stand out more. The camera was set on Aperture priority and had an ISO of 200 and an aptitude of F-25 and a shutter speed of 1/60th.

The image shows the crowning effect that occurs when a droplet hit a pool of water. The reflection of the crown’s reflection in water is very crisp. The colors are patriotic and visually appealing. An interesting improvement would be attempting a double drop interference picture, though that will be harder to achieve. The hardest part was choosing which photo to use because of the variety droplet effects, figure 2 shows other images taken during the photo-shoot.

Previous Post
A Worthington jet resembling an apple has formed from colored milk being dropped into a pool of differently colored milk.
Next Post
A stone falling into a cup of water creates a splash