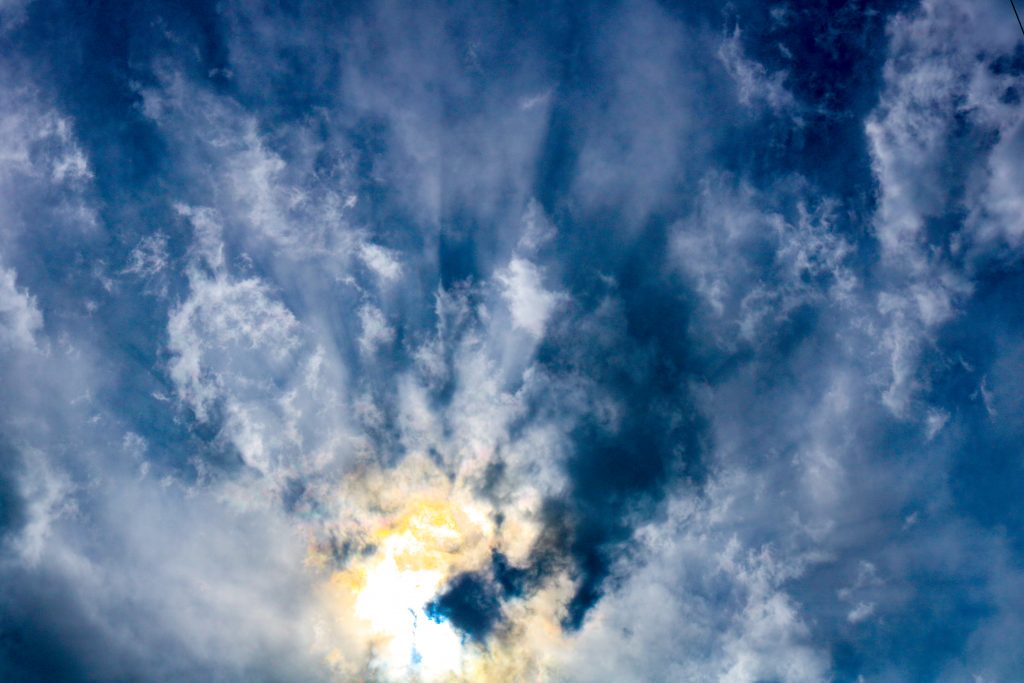 These clouds appear to be altocumulus in front of smoother cirrostratus. On March 4th, the day was warmer than average (58ºF High), then began to get windy and chillier around 4pm, which is when this image was taken.

Clouds are anticipated when the temperature and dewpoint lines are close. The atmosphere seemed to be somewhat stable, given the CAPE value of 0.00.

The altocumulus clouds captured in the image were taken right off of Broadway Street near Varsity Apartments in Boulder, Colorado on March 4th, 2018. The temperature was warmer than average at 58ºF, with high wind velocities. I planned on capturing the sun’s rays beaming through the clouds as the sun dipped below the mountainous horizon. The weather changed rapidly and it seemed ideal to photograph clouds nearing the end of the daylight hours.

I made sure to angle the camera so it was facing towards the west, approximately 30º above the horizon, just above the Flatiron mountain range. The time was 5:04pm and the sun was completing its final descent towards the mountains. Massive orographic clouds coming in from the cold front predicted that day were beginning to take over much of the sky. Although a cold front was honing in on the pleasant high pressure system experienced all weekend, the atmosphere appeared to be stable, given the skew-T diagram shown and the CAPE value of 0.00. Clouds are typically anticipated when the temperature and dewpoint lines are close together on the diagram, which was surprisingly not the case in this graph. However, as one can see, the lines begin to merge together at the bottom of the diagram.

I believe the correct classification of these clouds to be altocumulus in front of smoother cirrostratus clouds. Altocumulus clouds usually occur as layers or patches in various shapes such as heaps, rolls, billows or pancakes, often white or gray in color. Altocumulus clouds primarily consist of super-cooled water droplets of minus 10ºC, but ice crystals are often present. Usually they do not produce rain, but may suggest a weather change within a day or so. On the other hand, cirrostratus clouds are high-level clouds, appearing as narrow, uniform and featureless white veils. They are darker than cirrus and are always thin enough for the high Sun to cast shadows. Cirrostratus sometimes cover part or all part of the sky and often produce a halo phenomena, either partial or complete. They form at altitudes between about 5 and 10km (about 16,600 and 30,000ft). Cirrocumulus also commonly indicate a substantial amount of moisture and warm air that has advanced to higher levels of altitude. This makes sense because the days following March 4th were colder, windier, and cloudier than average. I believe the wind velocities were at 20-30mph, with gusts up to 40mph. However, the atmosphere remained stable.

I decided to use my Canon EOS Rebel T6i digital camera for the shot, considering the lighting was all natural. The dimensions of the image turned out to be 6000 x 4000 with the F number at 14, the focal length at 27, exposure time at 1/500, 400 iso, and no zoom. The size of the field of view was about 1 mile x 2 miles across (very much of an estimate). The distance from the object to the lens was at least 15,000 feet.

For post-processing, I decided to use Adobe’s Creative Cloud Lightroom program. I mainly tinkered with the highlights, whites & blacks, saturation, vibrance, clarity, and the dehaze feature to bring out the definition of the shapes of the clouds.

Overall, I believe the final “Cosmic Cloud” image was a success. I was able to capture the rays beaming from behind the clouds and the consequent colors and hues. Next time I will try to tone the exposure down on the lighter parts of my images so they do not appear overexposed.