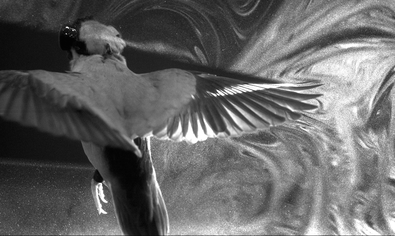 Stanford University and Lentinks Labs discovered vortex breakdowns occur instantaneous after downward strokes from the wing tips of slow flight animals where as previous models and experiments were not able to capture this phenomenon for several wing strokes and assumed frozen vortices occurred prior to the measurements collected.   This experiment was conducted by training a parrot to wear 3D printed laser safety goggles and fly from one perch to another through a non-toxic micro-sized aerosol particles.  A laser sheet and PIV cameras captured the disturbances caused by Obi at the initial interference of the wings.  The beauty I found in this experiment and imagery/video is the ability to capture the air flow from a slow flying animal with out harming or impeding the animal.   This proves current assumptions of animal flight at the quasi-steady lift is invalid and could lead to better design of future flight mechanics.  Study was conducted under Eric Gutierrez and David Lentinks.   Photo was taken by Eric Gutierrez. Video was taken by Kurk Hickman