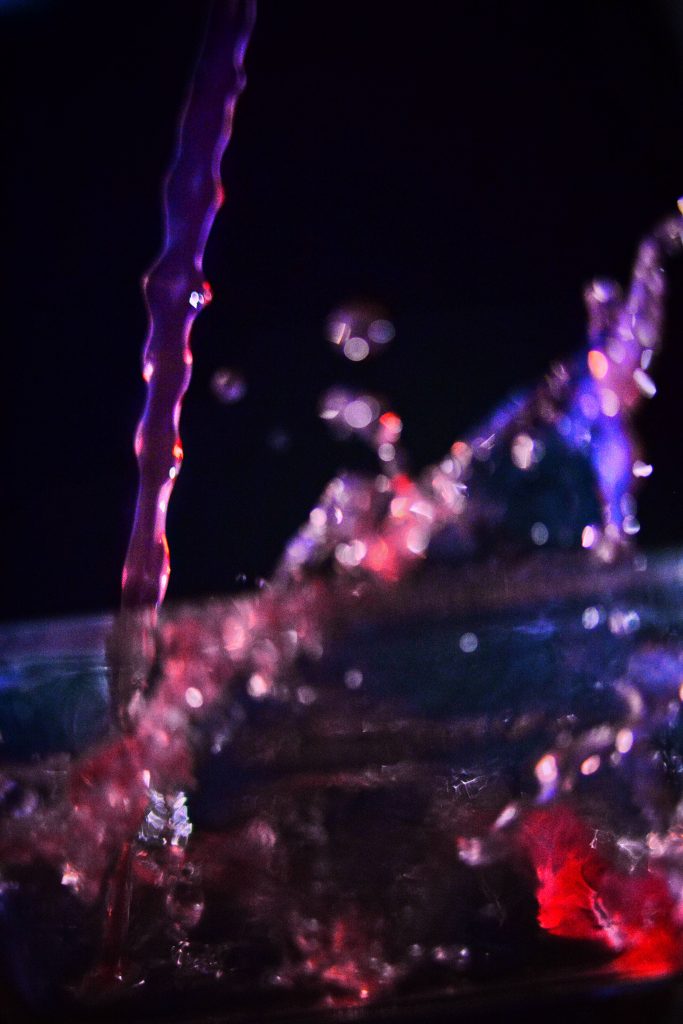 Image of cranberry juice being poured into an empty glass vase from a height of two feet. As the juice hits the base it spreads out and up the side of the vase walls. With a single light to the side it brings out many different colors and shades. I had a difficult time with focus and being too grainy due to high ISO in the low light environment.

For our first project in the class, we were supposed to individually go and “get out feet wet”. This meant that we could go and try and capture any sort of flow that we could think of that we found interesting. It could be fire, liquid, gas, or other natural occurrences but we had to try our best to create a creative piece out of it. I was very much interested in the flow of a liquid and had seen many beautiful photos of splashes and droplets that it made me want to experiment with it myself and see what I could capture without any background in it.

I knew I wanted the liquid to have a color to it so that the image would have a color gradient and end up popping a bit more. I didn’t want to do anything with food coloring though as it is used in so many different projects and, while it does look great, I wanted to keep it simple and different. What better to use than what’s in your fridge already. I had a gallon of Ocean Spray cranberry juice sitting in the fridge that we a bright red and I figured it would work quite well. My hope was to capture the juice flowing out of the container and splashing off a flat surface.

So, to not make a mess I used a transparent glass vase that was about two feet tall and 8 inches in diameter as my container that I could shoot through. I also wanted the liquid to be the only subject in the image with a completely black background. This means using six 4×8 sheets of black paper to create a black background behind and below the vase, as well as placing all of this in a low light area of my house, which happens to be in one corner of my kitchen. The lighting source that I used was just my I-Phone light directly to the right side of the image.

Then I placed the camera, a Nikon D610 with a 24mm prime Sigma 1.8 lens, in a portrait setting within ½ inch of the vase and started the process of dialing in the focus, shutter speed, F-Stop, and ISO on the camera to best for the picture. I eventually landed on a shutter speed of 3200, and F-Stop of 2, and the ISO at 6400. With the settings done it was just a matter of timing the shot and the time I poured the juice. I ended up shooting 8 FPS with one hand and pouring the juice from the height of the vase with the other until one came out.

What I noticed in the photo was that the stream coming down from the container was not uniform and had sections within it that contained more liquid than others giving it a look similar to a round beaded necklace. This comes from the effect of air pressure forcing its way through the container opening and restricting liquid flow momentarily while it tries to equalize the atmospheric pressure outside the container. It does this in a cycle as the water pressure and air pressure change and overcomes one another.

While I got a photo that I like and turned out almost how I envisioned, I did have a lot of trouble with not enough lighting. I could have used a stronger light source allowing me to increase my F-Stop and lower my ISO to improve the look of my image and its grainy blurry nature I was trying to get a crisp but smooth and calming look to the photo and I think it turned out more intense and flashy instead because of the lighting. I wish I could have had all of the liquid in focus but that meant the aperture would have made the image too dark. Same with the ISO, it was grainy even on the portion that was focused but if I were to lower the ISO it would have been too dark. I tried to combat these as much as I could in post-production, but it had little effect by the time I had made it light enough to see what was occurring. If the future to improve on this image I will use a camera strobe to improve the lighting.