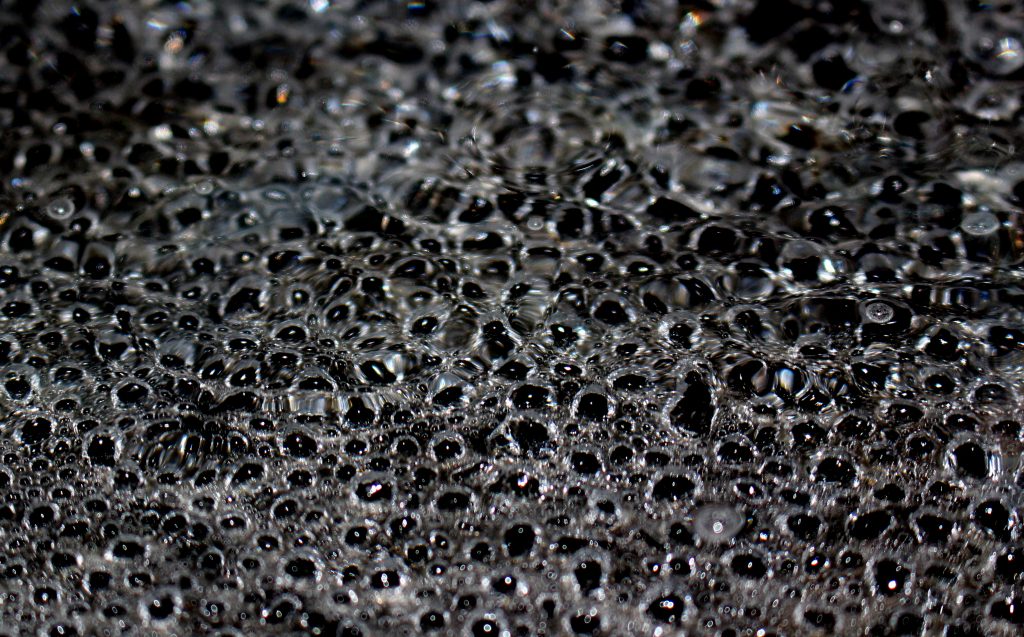 The Water has Eyes

This is a photo of pure vapor bubbles in boiling water.  When I thought of taking this photo I really wanted to try and capture a single bubble as it was rising to the surface. As I realized that was not going to work I decided to try and capture that when someone looks at it they must think about what could cause it.  After a few tries I was able to capture a picture that showed the boiling water in a beautiful way.

The flow was created by boiling water in a black pot.  This flow is cause by convection.  Convection is when the heat passes from the burner into the black pot, and from the black pot to the water at the bottom of the pot.  Once the water at the bottom heats up it rises to the surface and forces the cooler water to move down.  The motion of the hotter water rising causes circular motion.  Once the liquid gets hot enough to where the water on the pot surface of the pot becomes vapor.  The vapor at the bottom of the pot groups together to form bubbles, once the bubble is large enough it is able to break off the bottom of the pot and rise to the top.  As you can see at the top of the photo the surface tension of the water traps the bubbles for a split second.  The boiling point of water falls under the change in phase of a fluid category.  On a Temperature vs. Pressure diagram for water, boiling water falls on the line between liquid and vapor.  While the water is boiling it stays at a constant heat, this is because the energy that it takes to fully change a phase is very large.

To create this image, I used a black pot and filled it with 3 cups of water and waited for it to start boiling.  Once the water started to boil I picked up the black pot and tilted it a little to get a bit more of a side view.  While taking the picture I keep the light that was above my stove on as well as using the flash that is on my camera.  I figured out that the more light that I was able to get reflecting off the water the more interesting the picture became.

In order to capture the photo that is above I used my roommates Cannon SL1.  When taking the picture, I got as close as I could (about 8-9 inches) to the boiling water while keeping focus towards the front of the picture by using close up mode on the camera.  To let as much light as I could in I turned the shutter speed down to 1/60 and F-stop to f/5.  By turning the ISO up to 400 I was able to get a sharper image.  In post processing in cropped out parts of the photo that included the bare pot as well as parts of the boiling water that just didn’t look good to me.  After cropping I went in and adjusted the colors to turn the black parts of the pot all the way black and made the light reflecting off the water white.

I really like how the image turned out.  I think that it shows the flow, but it shows it in an in interesting way.  I think the more you look at the photo the more your find.  It shows both the vapor bubbles rising as well as the surface tension of the water trapping them in.  I think one way to take it further is to try and take a photo from the side, I think that would show some interesting things.  Overall, I am really happy with how my photo turned out.