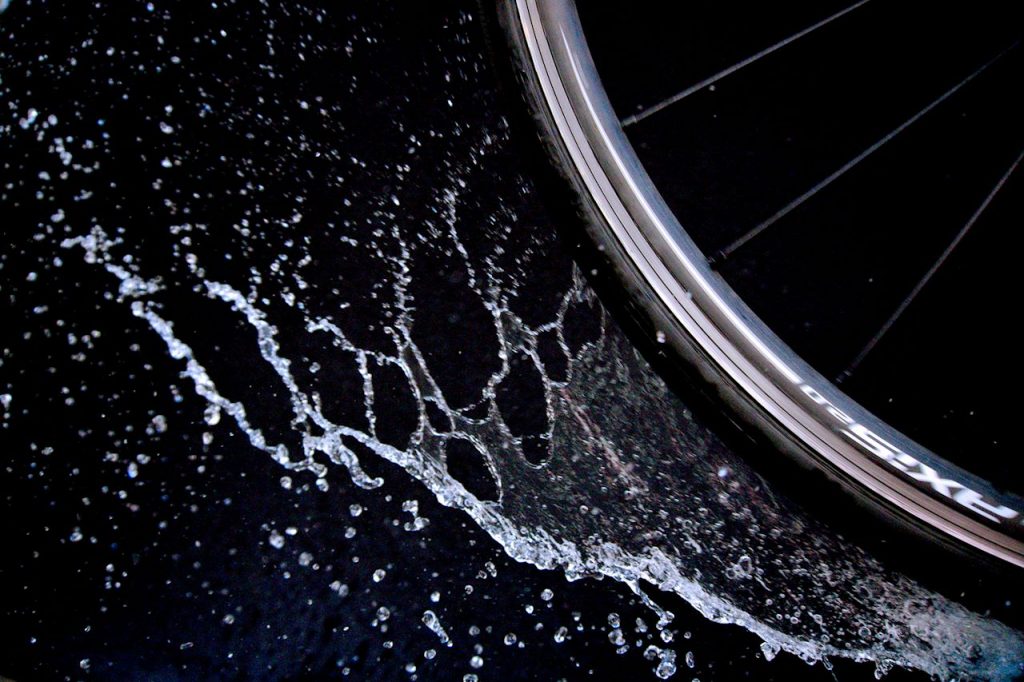 Get wet is intended to “get our feet wet” in flow visualization where we begin to familiarize ourselves with photography techniques and equipment as well as to begin experimentation with the different flows we experience in every day life. I have ridden bicycles through just about every kind of weather and riding in wet weather has taught me that it is almost impossible to stay dry while riding a bike in the rain. I found that water would cling to the rear tire and spray along my back. I wanted to capture this effect in as controlled of an environment as possible for my Get Wet project so that I could see what is actually going on betwen the water and the tire.

All of my attempts were run outside on a sunny day which made lighting simple and allowed me to use fast shutter speeds. A bike was hung on a bike stand with the rear tire approximately 10″ above the concrete ground. A black backdrop was hung in the background as well to reduce distractions and to amplify the effect of the water. The rear wheel was pedaled to approximately 60 RPM and left to freewheel. While the wheel was spinning, a baking dish full of water was lifted to the bottom of the spinning wheel so that the tire made contact with the surface of the water. This caused water to spray backwards for 2-3 seconds as the wheel slowed due to the loss of kinetic energy to the water. Initially, a mountain bike was used with some success but the knobby tires caused the water to splash chaotically and it was difficult to capture any kind of interesting flow. The final shot was captured using a road bike, the smooth tire profile created a more interesting flow that will be discussed later in this report.

The final image was captured using a Sony A6300 camera with a 16-50mm zoom lens. The best results were achieved using manual focus as auto focus would hunt during the shot and create unpredictable results. A fast burst shutter mode was used since the actual event took place so quickly. Burst mode allowed for the best possible image to be selected. The final shot was taken at an aperture of F3.5 with a shutter speed of 1/2000s and an ISO of 6400. The focal length was 16mm.

Image editing was done in Corel AfterShot to boost the contrast, darken the background and highlight the flow of the water. Additionally, the blues were accentuated to give the water a more aquatic look and to prevent the image from appearing in gray scale.

This image shows showcases some interesting fluid flow in several different stages. Initially, the water is accelerated rearward by the spinning tire and is held together by cohesion. The water begins to form a thin membrane (or sheet) as it separates from the tire and the fluid attractive force is not sufficient to continue carrying the water in a circular path. As the membrane continues to stretch, surface tension begins to take effect and the membrane breaks down into ligaments. Again, the ligaments stretch to continuously smaller diameters until surface tension comes back into play. Surface tension then breaks the ligaments up into individual drops or blobs that continue on their trajectories until they hit the ground or some other obstacle.

This kind of breakup is typically seen on flows with lower Reynolds numbers. What is happening in these flows is that the surface tension is bringing the free surface energy to a minimum. Surface tension creates instability within the sheets and membranes and amplifies the inconsistencies (called varicose perturbations) within the flow. This means that surface tension works to make the thin areas of the fluid even more thin and concentrates more mass in the thicker areas to create blobs. The thin areas of the sheets or ligaments see progressively greater local pressure which forces the fluid to the lower pressure (thicker) areas of the flow. Ultimately the thin sections become so thin that the fluid pinches off and creates separate drops. This effect is called vericose breakup.

The size of the resulting droplets has been extensively studied and has been found to primarily be a function of the viscosity and velocity of the fluid. The more quickly the fluid is moving, the smaller the droplets will be but, if the fluid is moving too quickly, it will begin to break up via different mechanisms caused by friction with the air.