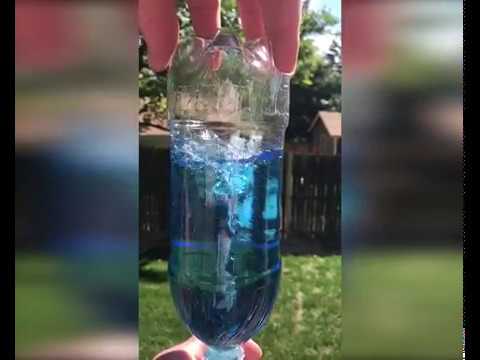 For my first Flow Visualization assignment I decided I wanted to capture some interesting footage in slow motion, and I’ve always been fascinated with whirlpools, so this seemed to be a perfect combo. My final video consisted of a whirlpool forming between two emptied bottles attached at the cap. Unfortunately, this was not what I initially set out to do. I had hoped to capture video of food coloring mixing in with the water in the whirlpool, to see how it moved the fluid in the space not in the exact center. My plan was to cut the bottom off one of the bottles, so that I could get a clear shot of the top of the whirlpool, but numerous problems prevented this. For one, the whirlpool required me to spin the bottles as I flipped them over. If I didn’t spin them, the water would just slowly drip from the top bottle to the bottom. Without a bottom on the top bottle, spinning them would have made a big mess and cost me most of the water in the system. The next problem was that the water wouldn’t be able to stay in the top bottle long enough for me to add food coloring and set up the camera. I tried to build some sort of door between the two bottles that would let me release the water when I wanted to, but this proved too leaky, and I lost a lot of water that way too. The end product is a monument to compromise, but I still think it came out pretty cool.

Whirlpools in the ocean are formed by opposing tidal forces, but what I did is a little different. It was more like the whirlpools that form in sink and bathtub drains. As the water flows downward toward the drain, it’s pulled from all areas of the basin. Because of this constant pull, water particles are knocked out of the way by incoming particles, but since they are still pulled downward, they gravitate back toward the drain and create a spiral flow (Brian). I addressed this a little in my first paragraph, but in my set up I needed to spin the bottles to create the whirlpool drain system rather than the slow drip. I think this is because the hole between the two bottles was too small. The water wasn’t flowing through it fast enough to create all those bumping particles, and so it needed a little boost.

My set up was very simple. I took two clear tonic water bottles, but any two similarly sized bottles will do, and emptied their contents. Then, I glued the tops of caps together with a ring of hot glue around the circumference of the seam. It’s really important that this is a water tight seal. Next, I drilled a hole through the two caps, so that they could still be screwed on to the bottles, but water could pass between them. The last step is to fill one of the bottles about 3/4 of the way full, and screw both caps on the bottles, so that one bottle is resting on top of the other. To get the whirlpools, I just flipped it over, and gave it a quick spin.

I also added some food coloring to my water. This is by no means essential to the experiment, but I think it added a little flare. It was actually a remnant of one of my initial ideas, where I hoped to see the food coloring mix in the whirlpool, but as I mentioned earlier, this did not work. I do think that clear liquids would work best though, I don’t think the whirlpool would be as visible, or at least not as clear with an opaque liquid like milk.

I shot the video with my iPhone 7 Slow Motion camera. It shoots at 720p, the standard, basic 16:9 HD aspect ratio, at 120 frames per second, slowing it down by a factor of about 4. I would’ve liked to be able to shoot it slower, but my biggest complaint is the resolution. I think it would’ve been awesome to be able to get up really close to the spiral, but unfortunately my video gets blurry when I zoom in too much. I also shot it outside, because I really appreciate natural sunlight. Unfortunately, this also means I captured all the details in my backyard, which distracts from the flow. This could be easily corrected by holding up some towels or some other large opaque backdrop, though.

Overall, I’m fairly happy with the video. There are of course things I would like to do differently, like improve the resolution, or create a less distracting backdrop, but overall, I think the flow was illustrated well. I really like the beginning of the video, where the bubbles coming up from the bottom of the bottle gradually spin until they become a full blown whirlpool. That was not something I was expecting to see, and I’m looking forward to future assignments, and seeing other things that I was not aware of.