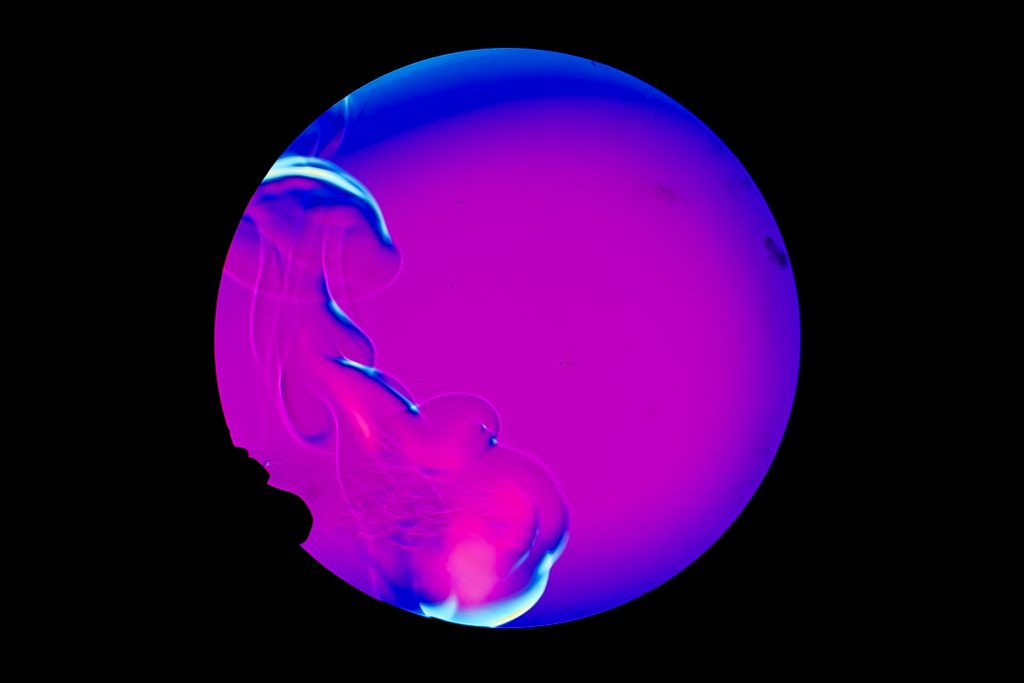 This image was created for our 3rd Team photo.  We wanted to compound on our experience in our 2nd team collaboration and pursue schlieren even further.  The intent of this style is to observe the differences of densities in the air (or any medium for that matter).  These densities are normally hidden to the human eye.  One example that is not hidden, is seeing heat waves rise from the ground on a very hot day.  This is known as scintillation.  I worked with Owen Brown on this project.

One way of putting it is, schlieren is a way of visualizing temperature gradients in a transparent medium.

This photograph was obtained by use of a Z-style schlieren setup.  It features 2 mirrors, a point-source light, a color gel, and a camera.  The mirrors we used were 8 inches in diameter and very heavy.  These mirrors in-particular are concave (or known as parabolic).  The colored gel is a rainbow-style filter.

Where the distance between mirrors was 2*f, f being the focal length.  It takes a lot of fiddling around to get just right.  The light that passes through the test section is what is known as ‘colimated’.  The LED light source must be positioned at exactly the right distance from the mirror in order to produce this colimated light.  The light also has to be a point-source so that the knife-edge (or rainbow filter) can effectively cut the light at the pinpoint where the light flips (as seen in the diagram).  Persistance is key in getting this right.

Finally, there is a way to do this schlieren setup with just 1 mirror, which works great.  The benefit you get from using 2 mirrors, is more accuracy, and the removal of a ‘doubling’ effect, which causes your photographed phenomenon to appear twice in a slight offset.

Instead of using a knife-edge, we used the rainbow-color filter.  The filter allows us to visualize the level at which we are bending the light.  Based on the colors we observe in our photo, we can determine where the largest differences were in densities. The image below depicts what I’m trying to say:

So if you look back at my photograph, you can see that the teal sections are from being bent away from the origin.

The actual phenomenon that I photographed was a combustion of a flamable gas, aerosol lit by an ignition source that was held at a safe distance from humans.

The camera was setup to recieve the light behind the rainbow filter.  The last time we did this, I had to reduce the exposure as much as I could.  Since we used the filter this time, I had to lower the shutter speed in order to compensate for the loss of light.

Oddly enough, because there was so much light focused on the sensor, this photo was taken in a lit room.  Contrary to the black background you see.  After capturing the photo, I raised the contrast, pulled some of the greys down to full black, and raised the saturation a little to provide a good pop to it.

The image succesfully reveals a temperature gradient in the air.  To this extent, I think it is succesful.  It is also pretty to look at.  What I don’t like, is the flow visualisation experiment that we performed.  I would like to do something more repeatable, or interesting.  Such as candles lined up, an explosion (a popular thing to do with schlieren to see the pressure wave).  There is a lot of potential in the world of schlieren, and it’s a way to see the unseen which is extraordinarily magical.  It is even cooler that this can be seen without a camera, and simply projected onto a wall (instead of the camera sensor), with no digital equipment.