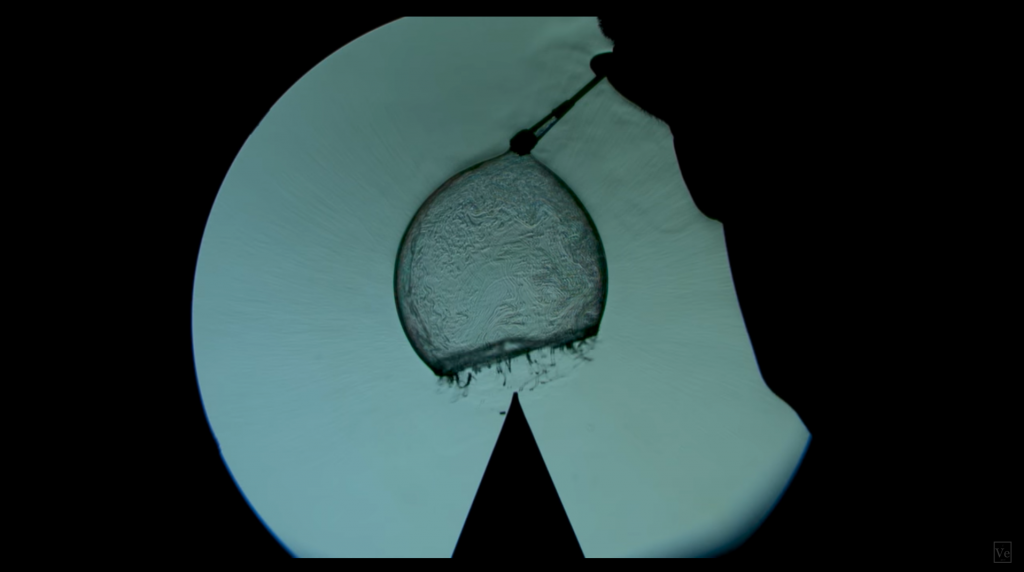 This image is a frame pulled from a video on Schlieren flow visualization filmed by Raquel Nuno and produced by Veritasium. This frame is pulled from a slow motion video of a soap bubble being popped. Schlieren flow visualization allows us to capture images of tiny changes in the index of refraction of air due to pressure and temperature changes. This means that using this technique, we can see the convective flows of air off of hot surfaces (shown moving around Mr. Nuno’s hand in the above image) as well as all kinds of otherwise impossible to see phenomenon. Additionally, the flows within the soap bubble appear in really high detail, so this may be an interesting way to capture motion in soapy water. This technique is also useful for visualizing aerodynamics without the need for “seeding” and can therefore help us see higher detail in some cases.

I first encountered this type of imaging in my fluid mechanics class and then later in my heat transfer class. The setup for this technique is somewhat complicated, but the results are really interesting. If time allows I would like to try and use this technique to capture convective flows or the movements of sound waves if I can get my hands on high speed cameras. The process to make these types of images is described in an NPR video below, and the video from which this image was pulled is embedded below that.

Veritasium video where the featured image was pulled from: