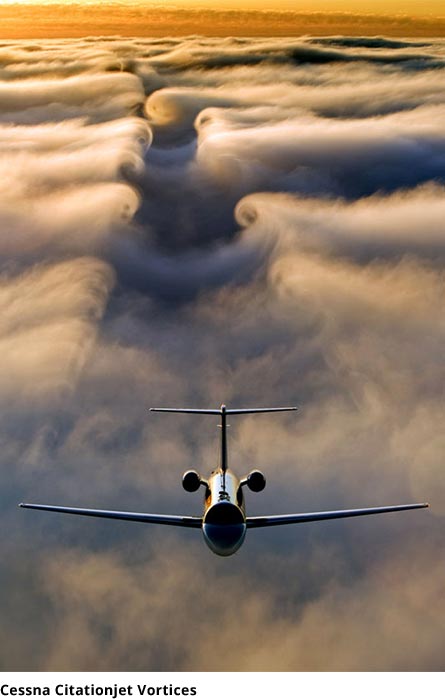 This image of a Cessna Citation jet was taken by air-to-air photographer Paul Bowen. I think the contrast of the aircraft’s orderly shape and the chaos that is beneath it is interesting. This image also does a great job of illustrating wingtip vortices. An aircraft’s wing generates lift by creating a pressure differential above and below the wing. At the wingtips, the high pressure air from below the wing spills over the tip of the wing and into the low pressure region, creating vortices. These vortices get stronger as the aircraft gets heavier and slower, and generally follow the aircraft’s path, sinking at 400-500 fpm. They can be hard to visualize, but are important for pilots to understand because they cause wake turbulence. Flying into wake turbulence can lead to uncontrollable roll of the aircraft, structural damage, and the pilot losing control of the aircraft; all of which can be dangerous, especially near the ground.