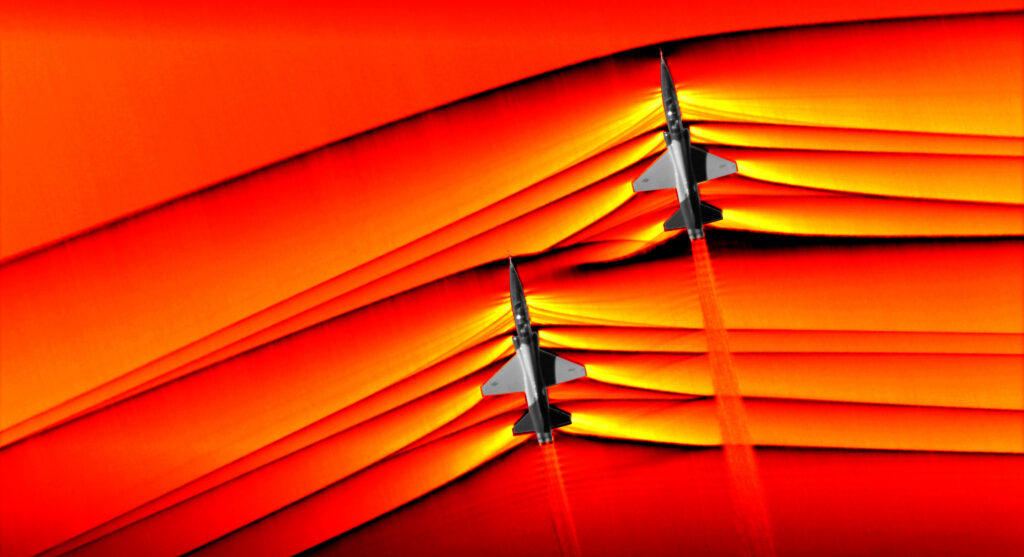 This image was captured at NASA via their Airborne Background Oriented Schlieren Imaging 4 (AirBOS 4) system which is a method used to visualize the effects of an aircraft on the surrounding air caused by shockwaves, aerodynamics, and engine exhaust.

The science behind these images is ground breaking in the field and works by, “flying a slow-moving observer airplane equipped with high-speed digital cameras, looking down at a landscape that has ‘visual texture’. The cameras record this landscape while awaiting the passing of the supersonic aircraft though the cameras’ fields-of –view,” which causes measurable disturbances in the air which have varying indices of refraction from the surrounding air. NASA researchers then utilize an image processing program that renders the above image by comparing the camera data before the aircraft enter frame to the camera data while the aircraft are in frame, and visualizing this distortion as, “a contour plot of the magnitude of the distortion in the vertical or horizontal direction.” It should be noted also that the aircraft are added as seen after processing in order to better demonstrate the phenomena at play to the viewer.

In terms of the art of this picture I appreciate the researchers adding the full color aircraft as well as giving the image a red/orange color gradient as it was originally monochromatic. Not only is it incredible because of the never before seen nature of interacting shockwaves from multiple supersonic aircraft flying in formation, but it is also beautiful because it provides a glimpse into the heard, but unseen, phenomena behind the engineering that is supersonic flight. In the composition of the photo I love the striking black lines that cut diagonally through the frame, as well as the subtle ripples coming off the tip and tail of the aircraft and the well defined but fuzzy exhaust trail from the engine.

Some other great images from the same project: