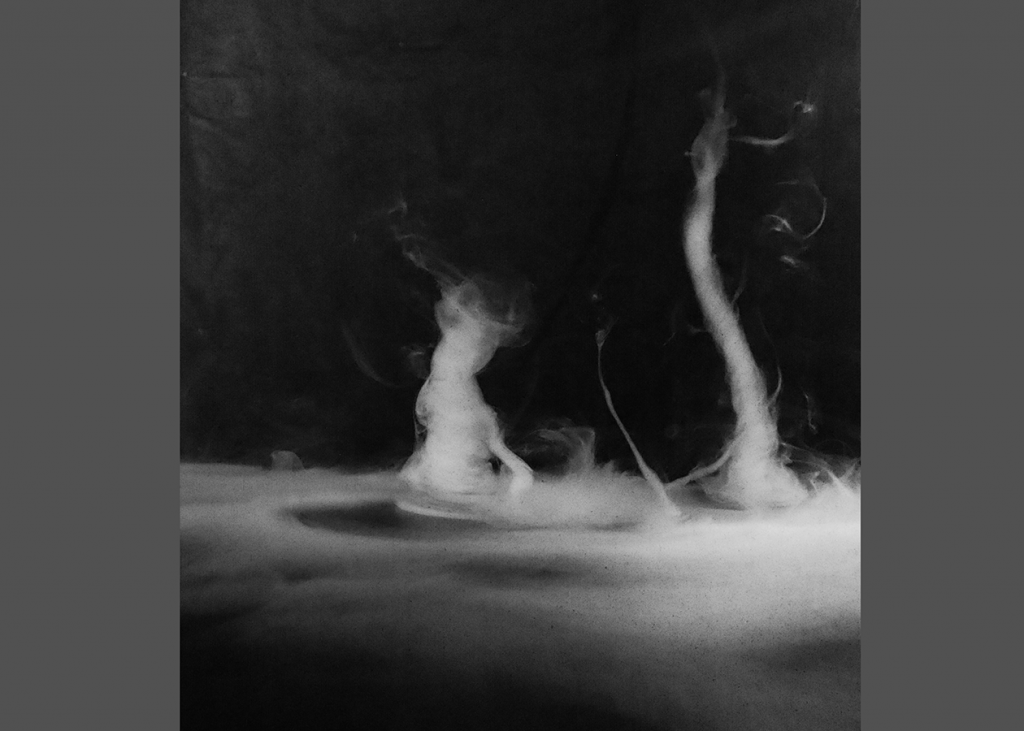 The Physics and Art of Fluid Flow

This project, “Get Wet,” is designed to help students get accustomed to using a camera and capturing the art and physics of fluid flow. The fluid flow captured in this project is vapor vortices. Two separate vortices as columns of smoke can be seen rising up on the surface of a table. This image was captured with the assistance of Jeremiah Chen and David Leng using a Nikon camera.

The substance used in this project is vegetable glycerin vapor. The vegetable glycerin liquid is heated to the gas phase using Ni-80, Nickel and Chromium alloy, wire coils. The gas is then poured and distributed evenly onto the surface of a table with a room temperature of approximately 20 degrees Celsius. Using an upright flat hand, the wrist is flicked upwards to create the flow seen in the image. The hand motion caused instability in the air which created turbulent flow as shown in equation (1). As the hand rises, the velocity of the hand will increase resulting in varying wind velocities on the table. The varying wind speed is known as wind shear, the change in wind speed and direction across a small distance (Federal Aviation Administration). The diameters of the vortices are estimated to be between 1 and 2 inches with a height of 6 to 12 inches.

As the air blows around, it creates low pressure and a tube of air that rotates parallel to the surface of the table known as a vortex tube. As the vortex spirals, an updraft is created sending the vegetable glycerin gas upwards. This is the same concept of how twisters and tornadoes work (Marshall). The low pressure inside the vortex slowly increases as the radius from the center increases. This pressure gradient allows the fluid to follow the rotation path as well as preserving the form of the vortex. As seen in the image, the center of the vortex is denser than the outer portion; this is a characteristic of an irrotational vortex. An irrotational vortex is when the angular speed of the fluid in a vortex is inversely proportional to the distance of the radius. This is also an example of free flow because the hand is removed before the vortex was created (Siddique). Therefore, the flow is free and irrotational such that it does not have torque and that the tangential velocity stays constant as shown in equation (2).

Since change in moment is zero for free irrotational flow,

The medium of the artwork is a white smoke-like vapor produced by the vegetable glycerin. The background is a black table with a black backdrop. The white color from the vapor and the black background brings out the contrast of the image. The spirals inside the vortices are accentuated as the physics can be seen visually. The pool of vapor at the bottom of the image helps visualize where the vapor came from and how the updraft lifted it up into the air. The difference height and diameter of the vortices creates a unique feel to the image.

For this image, four light sources are being used. The sunlight seeps into the room from the cracks in the window to provide a natural ambient lighting. Two directional lights are placed behind the camera and shining on the vortices which provide the most lighting for the image. The fourth light comes from the back right allowing the vortices to be lit from the rear as well.

The camera was taken on the edge of the table to eliminate the edge as a distraction. The field of view was set to high because it is difficult to place a vortex directly in front of the camera and that the image needed to be taken in portrait to capture everything. An ISO of 25600, aperture F3.5, and shutter speed of 200 was used to ensure that the vortices will be focused and the image will be clear in the current lightings. Photoshop was used to bring out the contrast of the image and to crop the image appropriately.

The final image definitely has revealed both the physics and the art. However, some improvements can be made. The contrast of the picture can be increased in order to remove the background and highlight the vortices. The ISO of the image is a bit too high and it could be lowered to help with the image quality.

Setting up the environment to create art such as lighting and background was tedious as I haven’t had experience with aesthetic appearances prior to this project. Producing the perfect image by creating the vortices and taking a good picture took many hours. Overall, this was a learning experience that allowed me to “get my feet wet.” Upon completion of this project, I have learned the physics behind how vortices work. I have also learned how to use set up and take artistic images.