Buoyant plume from a cigar accelerates upward to transition from laminar to turbulent flow. 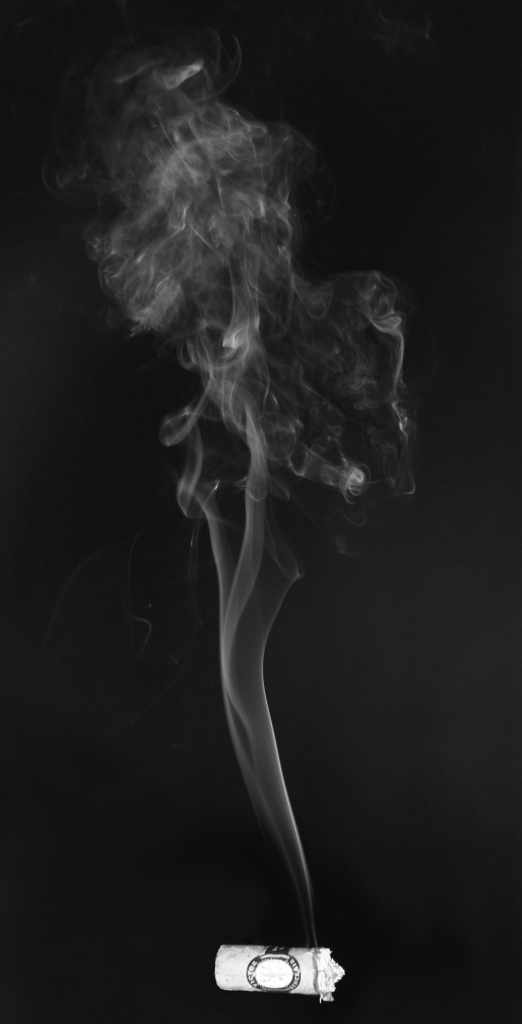 Buoyant plume from a cigar accelerates upward to transition from laminar to turbulent flow.

This project was a really good experience. I have been known in the past to just watch the end of a piece of incense that was lit and just watch the smoke twirl and curve. I originally wanted to do something with this effect. When trying it with incense the smoke proved to be too thin and not thick enough to show up. What makes more smoke than incense? A cigar. Next I tried a cigar. This one was significantly thicker and had a lot of laminar flow and turbulent flow, which is very interesting. The end of the cigar heats up the air near the tip and then carries particles up that we call smoke. I like how the flow transitions from laminar flow to turbulent in such a short time. This was a very interesting effect. My father helped me set up for the picture with light placements and tin foil reflectors with a black cloth draped behind the cigar. We also experimented with taking the picture with a background of nothing which actually go deeper blacks but there were some more random spots of trees and lights. We ended up using the backdrop but it turned out a little more grey than I would have liked.

Why does this happen? Why does the smoke start laminar and quickly and sharply become so turbulent? This question was asked to the University of Illinois Department of Physics and they didn’t exactly know [1]. They came up with an explanation that most likely makes sense but has not been officially proven yet. The theory is that the warm air takes the smoke particles up at a faster and faster rate. The thing is that the center of the column of smoke is warmer than the rest so it travels up even faster and at a certain point this becomes dominant and the flow becomes turbulent. Happens very quickly and precisely. Just interesting that it is one of those things with a very good theory but no one has proven it to be true.

This photograph demonstrates the relationship between different temperatures of air. Shows how density changes with temperature and the smoke is just a medium to which you can see this motion. It was not easy to capture. We had 16 100-watt fluorescent lightbulbs that were pointing at the cigar and assistance from the flash of the camera. We were holding the cigar with a clamp on a bike stand. I had to do a lot of post processing to get rid of the clamp. Even had to add back into the cigar to make it look normal. The smoke was very difficult to get it to come out nicely. I tried to make the background more black but when I did that it made the smoke look less impressive.

I didn’t only just focus on the smoke. I thought the fact that it was coming from a cigar was interesting and added to the photo. As long as I could remove the clamp successfully I think it would help the photo. As for the settings I had on my camera. ISO was at 500 so that the photo was not too noisy but still made the sensor sensitive enough to see the smoke. The shutter speed was at 1/80th. I wish it was a little faster so that the smoke would’ve been frozen a little better. It still look good but up close you can tell that it isn’t completely crisp. The aperature was as open as it could be so that we got the most light into the photo. The focus is crisp and the depth of field issue didn’t come into effect because it was such a small depth to be able to focus on. I think the photo came out nicely. I have an Idea for another photo that I want to pursue next. Using CO2 from dry ice and letting it fall instead of hot air rising.

This picture captures what I was intending to. I think with time and experimentation I can accomplish an even better image with a brighter flash, More controlled environment. I learned a lot about the physics of warm air flow during this photo and think I have more knowledge on how to improve the picture. Maybe there are things that are better than cigars for making smoke. I want the contrast to be higher and the edges to be sharper. I want the whites to be whiter and the blacks to be blacker. I think that boils down to contrast.

Here you can see cigar smoke as it is carried up by warm air and at first it is laminar and then becomes turbulent.

Previous Post
Vapor Vortex: Stage fog on a table is pulled up into vortex cores formed when a hand flicks upward from the table
Next Post
Two circular vortex rings propagate in air seeded by smoke