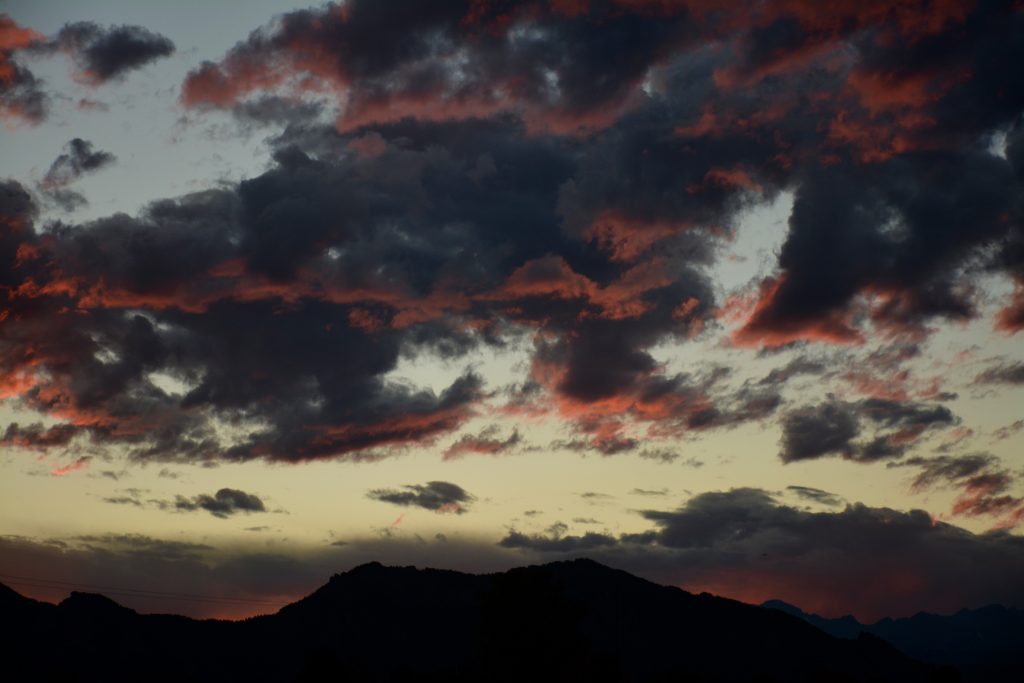 The second photo topic for this class was to have students take pictures of clouds. This assignment gave the student a month or so to spend occasionally looking up that the sky to find a cloud formation, sunrise, or sunset that they felt was picture worthy. The picture in this report was taken on October 2, 2016 of the sun setting after a stormy day. This report will look into the weather stability of that day as well as the artistic and scientific reasoning behind this photograph.

This photo was taken in Louisville, Colorado at 5:40 pm on October 2, 2016. There was no complex setup for this photo, it was just taken in the moment. The photo was taken out near an open-space with a good view of the mountains. The camera was angled slightly upward ~10 degrees from being horizontal, to show more of the cloud formations while still keeping the mountains in the frame of the photograph.

These are Stratocumulus clouds. This can be seen by looking at the Skew-T diagram of the day, shown in Figure 1.

By looking at the CAPE value, it can be seen that the weather was unstable. Knowing this in combination with the shape of the cloud formations, it can be said that these clouds are in fact Stratocumulus clouds. Because they are Stratocumulus clouds it is assumed that they were located in the Stratosphere, roughly 30-50 km above ground. The day this photo was it taken was stormy and it had rained hours before and there was some wind present when the photo was taken.

The camera used was a Nikon 7100 with a 18-140mm lens. The aperture was f/5.6 and the ISO was at 200. The shutter speed was 1/125. Editing was simple, the photo got slightly darkened in order to make the mountains less distracting. The original picture is shown in Figure 2.

As can be seen, not much about the picture was changed other than the slight brightness modifications.

The photo was chosen because of the colors and how the clouds glow behind the mountains, creating a cool visual effect. The photographer is happy with this photo, but one change that was pointed out was to try and remove the power lines that are present in the photo with some precise editing. This was helpful advice and the photographer plans to go back and try to remove that.