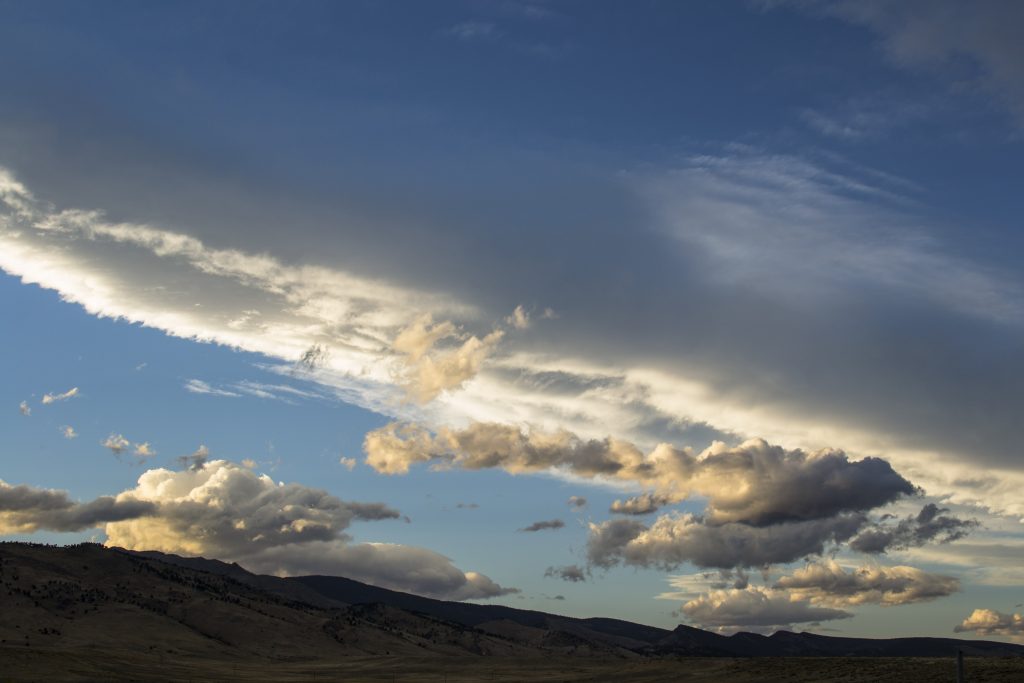 I took this image for the Clouds 1 assignment on October 3rd 2016. I chose North Boulder as my location because it is a fairly open area with a good view of the North foothills extending up to Lyons, and the Flatirons to the South. The time was around 6 PM, right before the sun set, allowing enough light to capture clouds without having to use high ISO or wide apertures. My goal was to capture a variety of clouds forming as wind blew over the foothills.

There are primarily two types of clouds in the image. The biggest is a large narrow cloud extending diagonally in the image, parallel to the foothills. I initially classified this cloud as a Foehn cloud wall; however, the cloud in my image is not in contact with the mountains so it is more likely a vertically developing mountain wave cloud. In the top right corner of the image some ripples are visible that support this classification; mountain wave clouds typically develop the characteristic ripples as moisture condenses at the peaks in the oscillating air flow (NWS 2011). The second predominant type of cloud in the image are small cumulus clouds which form at lower elevation than the mountain wave cloud, as air flows over the foothills. The base of these small clouds is relatively flat and they develop vertically. According to the skew-T plot recorded on the evening of October 3rd the atmosphere was fairly stable. The CAPE value is below 10 and the vessel’s temperature profile stays just to the left of the surround air’s profile; this indicates that the air parcel’s temperature stays lower than its surroundings’ and will not buoyantly rise. In the image the large wave clouds appear to be forming at around 18,000 feet; the skew-T confirms this indicating a cloud base at 592 millibar (LCLP) or about 16,000 feet.

I took my clouds 1 image with a Nikon D3100 and a 35mm prime lens. I was shooting at 1/100,  F7.1, ISO 100 which produced an image well resolved in space and time. I estimate that my distance from the foothills was 3 miles and given the direction I was facing, my distance from the clouds was about 4-5 miles. The only adjustment I made to the image in post processing was some contrast enhancement through a curves layer in photoshop to bring out a little more detail in the clouds.