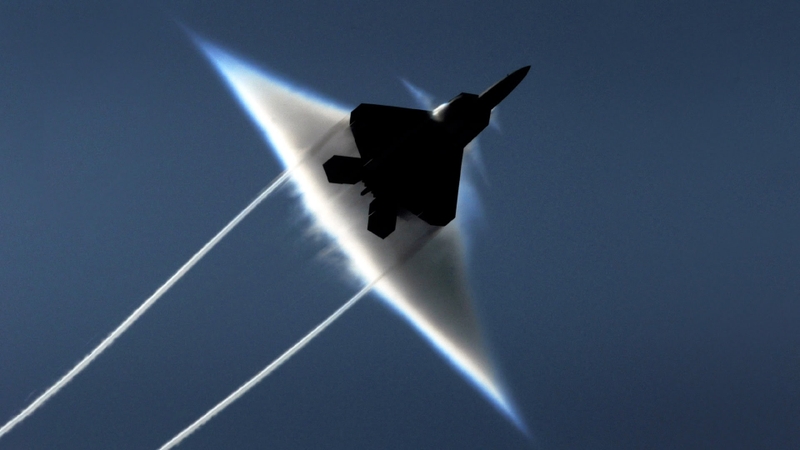 The following picture was taken in the Gulf of Alaska on June 22, 2009 of an Air Force F-22 Raptor while it demonstrates a supersonic flyby over the USS John C. Stennis. This photo was captured at the exact moment this aircraft was breaking the speed of sound, which is 768 mph or 1,125 ft/sec. As shown, a vapor cone (also known as a shock collar) can be seen around the plane. A vapor cone is a cloud of condensed water that generally forms around an object moving at high speeds through moist air. These cones will engulf an aircraft as it approaches and hits the speed of sound before dissipating and also only occurs under particular conditions. As such, the image above is actually very hard to capture and has to be taken at exactly the right moment in order to display the apex of the vapor cloud. The cone almost perfectly flows from the wings edge–almost as if it’s part of the plane itself–and is benefitted by the clear blue sky in the backdrop. In addition, the two trails behind the F-22 are called wingtip vortices, which are circular patterns of rotating air left behind a wing as it generates lift.  This combined with the vapor cloud exemplify the fluid mechanics and artistic effects that can be captured as an aircraft approaches and eclipses the sound barrier.