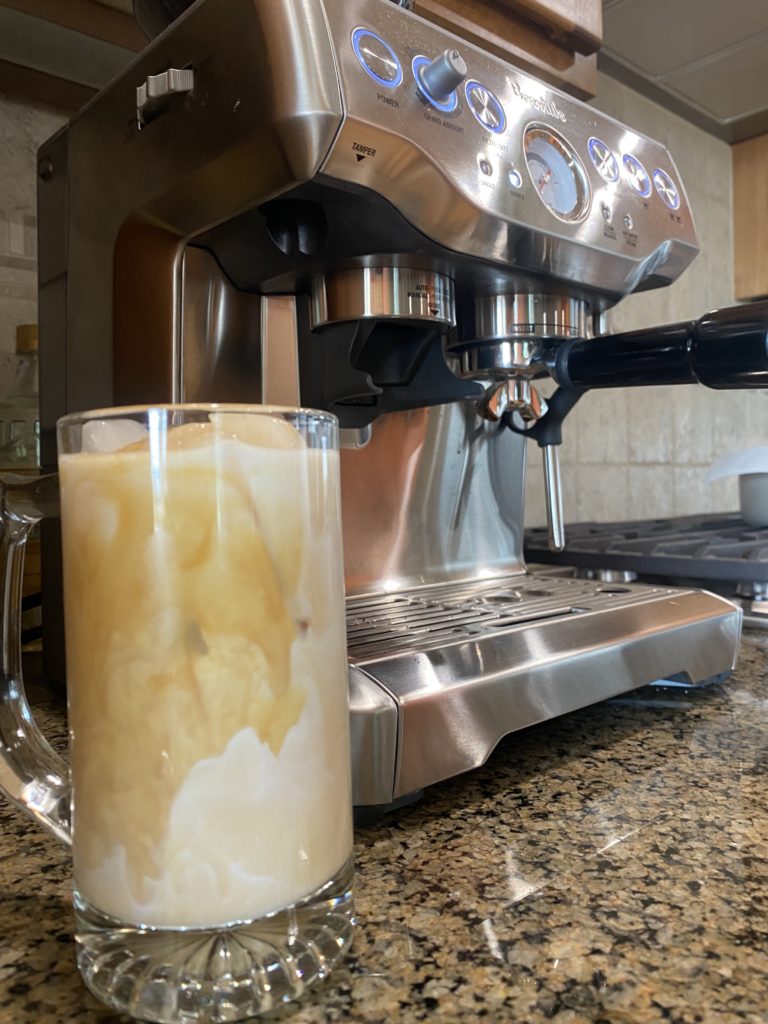 The reasoning behind my image was to demonstrate the turbulent flow of espresso as it runs through a glass of milk. When mixing two different fluids together, especially fluids with different viscosities, the image that comes out of it is almost peaceful and visually appealing. By using the right proportions and properties of liquid I was able to capture a moment in time where the fluids created a beautiful picture of motion. In this document I will be discussing the decisions I made, the fluid representation and a critique of my photo.
In my photo there were a few things to consider when it came to the flow of the espresso. A few things that I needed to play around with was the viscosity of the espresso, the height at which I was pouring the espresso into the milk and the amount of ice that I put in the glass could obstruct the flow pattern. All of these factors can affect the Reynolds number, which in turn changes the flow of the espresso. If we do an analysis of the liquid with some simplifying assumptions we can understand if the liquid is laminar or turbulent. The Reynolds number is calculated as follows:
Re = uL
Where ⍴ is the density, u is the velocity, L is the linear dimension, and μ is the dynamic viscosity. By  making some simplifying assumptions such as assuming the espresso has the density and dynamic viscosity of water we are able to approximate the Reynolds number. We can plug in 997 kg/m^3 for ⍴, 0.1524 for L (height of the glass), and 8.9*10-4 Pa*s for the dynamic viscosity. As for the velocity, we need to use an energy balance making the assumption that air is negligible. Making this assumption, we can write an energy balance between the potential energy at the spout of the shot glass and kinetic energy right before the espresso hits the milk. Doing so we get the following energy balance equation (Bernoulli’s Equation):
gh = 12v2
Performing some algebra we can get a velocity equation:
v = 2gh
I poured the espresso from approximately two 0.0254 meters away from the milk. Plugging in the height and gravity (9.81 m/s^2) we can get a velocity value of 0.71 m/s.

Revisiting the Reynold equation we can finally plug in our velocity and receive a Reynolds number of 121,213. This Reynolds number states that the flow is turbulent. This makes sense because in our photo if we look at our mixture we can clearly see that the flow is turbulent like.
In this photo, I used different kinds of materials to get the shot. For the milk I used 2% milk. This specific milk has a fat content that changes the density and viscosity allowing for a slow diffusion of the espresso. For the espresso, I used fine grinded Colombian Supremo coffee beans. Depending on the grind size, the espresso can come out watery or concentrated; which changes the density and the amount of air in the espresso. For the ice I used a shaped crescent ice cube. The shape is important due to the fact that the size and the amount of ice can change the direction of the flow. Finally, I used a circular cylinder shaped glass. The glass can change the flow direction and how well it diffuses through the milk.
In terms of the photo itself and how I took the photo, I used an iPhone 11 pro and took the photo in the portrait landscape. For the setting of the camera, the iPhone has limited variability so I used the default settings of the phone. In the photo, I thought it would be interesting to tell the story of how the latte was made. I offsetted the latte and showed the espresso machine in the background. I took the photo approximately 10 inches away from the glass. This allowed for a good focus of the glass itself and a wide shot of the espresso machine. For this photo I wanted it to be as raw as possible so I did not do any post processing editing.
For this photo I wanted to show the beautiful turbulent flow of a cup of coffee. I used to work at Starbucks and was always amazed by the image that comes from pouring the espresso. I wanted to capture the photo I never got the chance to when I was working at Starbucks. In this photo I think I successfully captured the turbulent flow of the espresso but felt as if there were a lot of aspects that I could have improved on. A few things that I did not like about the photo was the distinctiveness of the background. I initially thought that it would be a good idea, especially because I did not have access to a white background, but after some more critical thinking I believe I should have bought a white background. Another thing that I think could have made a better photo was if I could manually focus on the glass. If I could have centered the glass more and focused more on the coffee, this would draw the viewer’s eye more. If I could redo this photo I would have made it my mission to put more focus on the latte. I can do this by using a background and a camera that has more setting to manipulate.